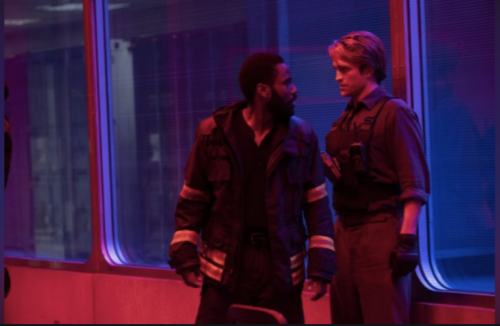 My dad made Men's Journal

My dad, physicist John G. Cramer, is in the October issue of Men's Journal. Who knew that the fashion accesory he lacked was a Delorean? 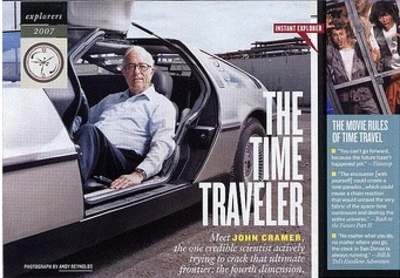 Further to the subject of retrocausality, my dad, John Cramer, emailed to say:

My planned experiment has been concantated with a review of the upcoming movie "Deja Vu" in an article on MSNBC at http://www.msnbc.msn.com/id/15817394/. 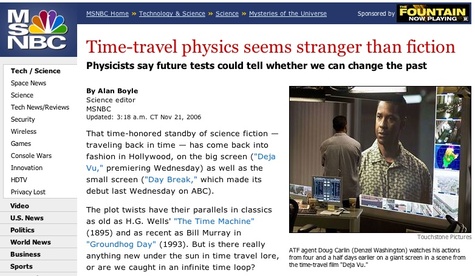 Over the next few years, some experiments hold out a chance of finally being able to show whether or not time can move backward as well as forward. Theoretically, at least, it might be possible for the future to influence the past, said John Cramer, a physicist at the University of Washington. He and his colleagues plan to try just such an experiment next year.

Cramer acknowledged that the concept of retro-causality doesn't seem to make sense, "but I don't understand why not."

Both Greene and Cramer know the science as well as the fiction side of the time-travel issue: Greene is the author of "The Elegant Universe," a best-selling book on string theory — but he also played a cameo role in "Frequency," a time-travel movie released in 2000, and served as a scientific consultant for "Deja Vu."

"It was a kick to be in the room with [producer] Jerry Bruckheimer and [director] Tony Scott and the writers, talking about special relativity and general relativity and wormholes," he told MSNBC.com.

Cramer, meanwhile, has done research into ultra-relavistic heavy-ion physics at CERN and Brookhaven National Laboratory — but he's also written two science-fiction novels and pens a regular column for Analog magazine called "The Alternate View." If his experiments show that retro-causality is a reality — that one event can determine the outcome of another event taking place 50 microseconds earlier — it could lend support to the ultimate alternate view of quantum physics.

"It opens the door to doing all kinds of really bizarre things," he said.

Someone in Nigera apparently read my most recent post, because I got a hillarious piece of Nigerian spam on the subject of quantum mechanics:

I am Civ Opopekim, the only son of the late Professor Lawrence Opopekim, of a much respected university in my country of NIGERIA, who was dedicated to the study of RETROCAUSALITY. Upon examining my father's scientific journals, I have discovered a matter of the most URGENT importance to your future (and past) well-being. As most of my father's work has not yet been published, I am counting on your discretion in this sensitive matter.

In the course of research, my father discovered the photons created in his experiments were entangled through QUANTUM MECHANICS with photons found in your locale. Further study revealed the break-through discovery of photon tilt patterns in the photons of your area based on experiments planned but yet to be performed by my father.

Alas since my father was poisoned to death with tainted YAK MILK by scientists from rival laboratories who lured him to GENEVA under the false pretense of a scientific conference, a financial situation has arisen where I can no longer assure the continuation of his research or the operation of his laboratory (it embarrasses me to admit this sad truth).

As a person of science, you are aware that even changes at the quantum level cause universes to take separate but parallel infinite paths. I fear that if I am unable to continue my father's schedule of experiments and therefore cause the photons in your immediate area to not have tilted in the way they already have, the life you have come to know and enjoy will cease to be and you will find yourself in a parallel existence unfavorable to you.

To this end, and for the sake of your past and current self as well as my father's research, I humbly ask you for the sum of US$10,000, which will allow me to keep for father's laboratory open for a time to carry out the scheduled experiments.

As an indication of your willingness, please forward to me your: full name, company, full contact address, phone, cell, fax, city, sate, zip code, occupation, SSN and all the necessary information will be sent to you on the acceptance of this arrangement.

His dad must have been a very important guy! It's not everyone who gets fed poisoned yak milk in Switzerland!

My father, John Cramer, remarks that he will know to avoid the yak milk at future physics conferences.

My Dad Is Cooler than Your Dad: "If the experiment works, a signal could be received before it's sent" 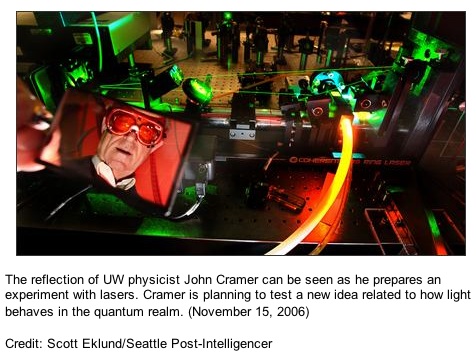 From yesterday's Seattle PI: Going for a blast into the real past: If the experiment works, a signal could be received before it's sent

If his experiment with splitting photons actually works, says University of Washington physicist John Cramer, the next step will be to test for quantum "retrocausality."

That's science talk for saying he hopes to find evidence of a photon going backward in time.

"It doesn't seem like it should work, but on the other hand, I can't see what would prevent it from working," Cramer said. "If it does work, you could receive the signal 50 microseconds before you send it."

Roughly put, Cramer is talking about the subatomic equivalent of arriving at the train station before you've left home, of winning the lottery before you've bought the ticket, of graduating from high school before you've been born -- or something like that.

My favorite blog post on this subject is from Correntewire: Science for Republicans! which first quotes from the article on my dad and then quotes John McCain' electoral regrets:

“We departed rather tragically from our conservative principles,” McCain lamented recently, offering his take on why the GOP fell from power in Congress. He urged a return to what he called the foundation of the Republican Party — restrained spending, smaller government, lower taxes, a strong national defense and family values.

Sorry guys, not this time out. This is just a physics experiment.

My dad, also a publshed novelist,  explains the excitement of experimental phsyics:

Even if this does fail miserably, providing no insights, Cramer said the experience could still be valuable. As the author of two science-fiction novels, "Twistor" and "Einstein's Bridge," and as a columnist for the sci-fi magazine Analog, the UW physicist enjoys sharing his speculations about the nature of reality with the public.

"I want people to know what it's like to do science, what makes it so exciting," he said. "If this experiment fails in reality, maybe I'll write a book in which it works." 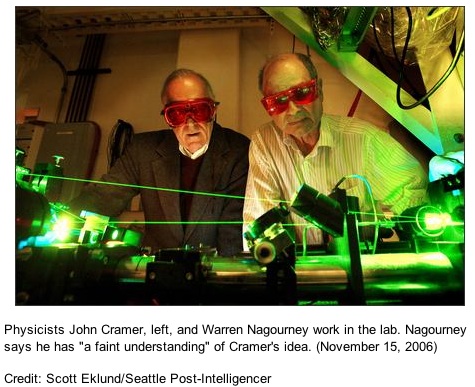 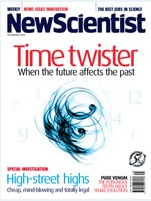 The cover article of the September 30th issue of New Scientist features a Gedankenexperiment that my father, John Cramer, proposed in a talk he gave at an AAAS meeting in San Diego last June.

Ever wish you could reach back in time and change the past? Maybe you'd like to take back an unfortunate voicemail message, or rephrase what you just said to your boss. Or perhaps you've even dreamed of tweaking the outcome of yesterday's lottery to make yourself the winner.

Common sense tells us that influencing the past is impossible - what's done is done, right? Even if it were possible, think of the mind-bending paradoxes it would create. While tinkering with the past, you might change the circumstances by which your parents met, derailing the key event that led to your birth.

Such are the perils of retrocausality, the idea that the present can affect the past, and the future can affect the present. Strange as it sounds, retrocausality is perfectly permissible within the known laws of nature. It has been debated for decades, mostly in the realm of philosophy and quantum physics. Trouble is, nobody has done the experiment to show it happens in the real world, so the door remains wide open for a demonstration.

As implied in the article, I have recruited an atomic physics experimentalist (Warren Nagourney) and we have decided to do at least the first stage of the experiment. I now have a LiIO3 non-linear crystal on order that will be needed to do this. We will begin the experiment in a couple of months when the argon-ion laser owned by the UW Atomic Physics group becomes available (sometime around December to February).

Here are the last few slides from his Power Point presentation. They outline the experiment. (Click on them to see bigger versions.) 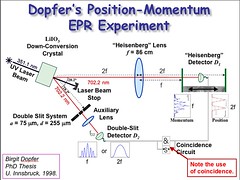 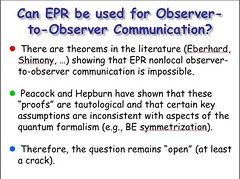 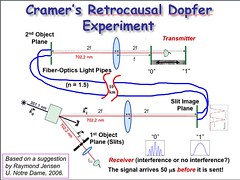 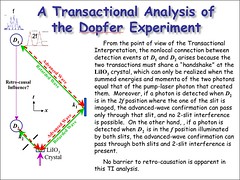 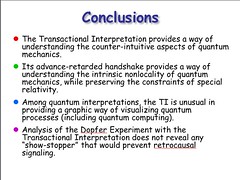