A few weeks ago, I thought I'd lost most of the The New York Review of Science Fiction back-issue files because I couldn't fine them on my hard drive. Turns out they were on a different computer in the house.  I've been copying them to my computer, so I know where to find them. Looking through the files, I've found some marvelous photos.

Here us the original 1988 NYRSF staff, minus David Hartwell, who took the photo, and contributing editor Samuel R. Delany, in whose apartment we met weekly until Chip got a good academic gig out of town. 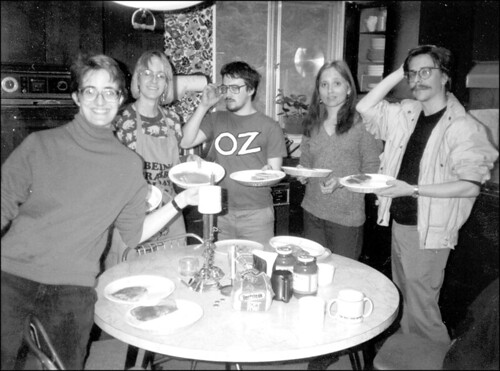 Delany telling a story to my then-small son Peter. Peter was quite entranced. Chip was waiting for us all to depart for ReaderCon. (Chip is great with small children.) 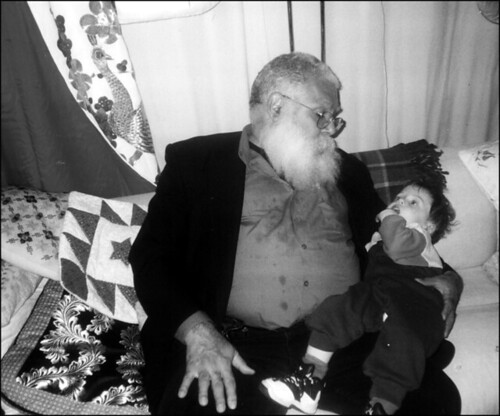 Plus an incriminating photo from issue 88, the first issue where we ran a photo section. 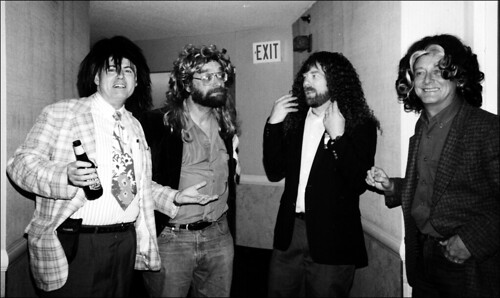 "Racism and Science Fiction" posted on the NYRSF site

At the request of a NYRSF subscriber and by permission of Samuel R. Delany, I have posted Delany's 1998 essay "Racism and Science Fiction" to The New York Review of Science Fiction site.


Removal of Semiprozine Category
A proposal to remove the Semiprozine Hugo was passed and forwarded to Montreal for ratification. The old qualification criteria from semiprozine are now used to define what is not eligible to be a fanzine. (We’ll post the actual wording later when we get official electronic copy). The vote was 40-28, and the issue continues to be hotly debated.

. . . I note that The New York Review of Science Fiction only meets 2 or the 5 criteria for "Semiprozine", by virtue that it pays contributors (token payment: $10/review & $25/essay) and acknowledges being a "semiprozine." As for the other criteria, our circulation is well below 1,000 copies and has been for the life of the magazine; while occasional and rare issues may contain more than 15% advertising, most contain much less; and the magazine does not provide a substantial portion of anyone's income.

If -- speaking purely hypothetically and only for myself -- NYRSF stopped making token payments for reviews and essays and instead gave contributors credit toward a subscription (say, 4 issues for a review, 10 issues for an essay), then according to Hugo rules, NYRSF would be a fanzine and would compete (and perhaps even win) in that category.

Many NYRSF contributors already use such an arrangement to pay for their subscriptions, so this would not be a big change from our end. Those obsessive enough to care about such things might want to go through the past decade of Hugo Award Final Reports to see how this would have played itself out in the Fanzine category, had NYRSF been classed as a fanzine.

A quick look at this year's report suggests that NYRSF would have won in that category on first ballot. Whether things would actually have worked out that way is hard to know. That really depends on what portion of NYRSF's Hugo constituency is old-line fanzine fans and how offended they would be to see a perrenial semiprozine nominee in the fanzine category.

Though NYRSF is one of the iconic semiprozines, we are only in the awards category by a hair, rules-wise.

FURTHER REMARK: Does anyone have an actual transcript of what was said at the meeting in which the rules change was discussed? The emerging impression I'm getting from what I can gather online is that some very smart people said some unfortunate things based on perhaps foolish assumptions.

And yet: I am wary of drawing conclusions about the true nature of the discussion based on online and second-hand information, having read too many mangled accounts of the goings-on at convention panels. So. Did anyone either record or take careful notes of the discussion preceding the vote of whether to eliminate the Semiprozine Hugo category? If so, can you either publish it online or email it to me?

Note additional discussions here, here, & here. (Also there Kevin Standlee had a discussion going somewhere on his LJ which I can't seem to find now.)

I created a page on this site to host the (rather large, cumberbersome) NYRSF index, carefully maintained by the marvelous Eugene Surowitz. What we have indexed is about 4.3 million words of science fiction criticism and reviews not on the web. (I need to go into the main NYRSF site and make a link to it.)

The NYRSF work weekend was first baked, then rained out. After a Saturday of temperatures approaching 100 degrees Fahrenheit (indoors and out: we have no air conditioning), the Sunday of the work weekend was plagued by unending afternoon thunderstorms, climaxing in a lightning strike on a tree in our yard. I  was on our screened porch at the time, and my right ear still hurts a little from the sound. A tree in the area of our children's play area, which we call the "circle of stumps" was hit about halfway down. This resulted in a helical gash about 25 feet long. There are large pieces of the tree as far as fifty feet away. Here are a few pictures: 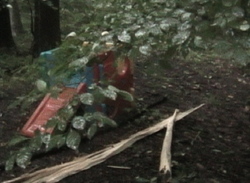 Here are twelve foot strips of tree by a Little Tykes slide. 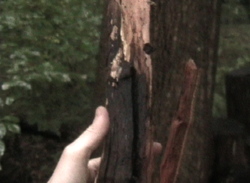 Here is a charred piece of tree. 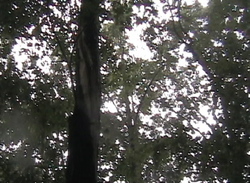 Here's a shot of the gash. My initial estimate was that it was about twelve feet long and six inches across. A closer look revealed that it is more like 25 feet long, and as much as 12 inches wide in places. 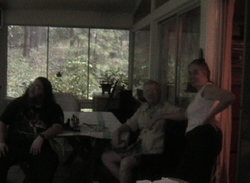 Kevin Maroney, David Hartwell, & Judith Klein-Dial await the moment when we can turn the computers back on and continue working on the magazine. Around five, David sent them home. (There were unrelenting storms for an hour and a half after that.)

(Photos taken with my video camera, so they're a little grainy.)

Moshe Feder sends congratulations to David and I on our anniversary which I must confess I had forgotten. I suspect David had, too, since he didn't mention it this morning. Nonetheless we went out for a fine lunch at Frodo's in Pleasantville with my father who is on his way home from doing physics on Long Island.

Meanwhile, I suppose I ought to mention that my name appears on the newly released Hugo ballot as an editor on The New York Review of Science Fiction, along with that of David Hartwell and Kevin Maroney. In recent years, NYRSF has actually been doing rather well in Hugo balloting. One of these days we might actually win, and then I would have to be nervous forever after when we sit in the audience at the ceremony waiting to hear our category to be called. Thanks to all who help put out the magazine and who write for it, and indeed those of you who subscribe.

Furthermore, David has been nominated in the Best Editor category. In the comments of the previous post, Patrick Nielsen Hayden tells you why David deserves your vote.

Meanwhile, my stepson Geoffrey Hartwell has recently been appointed Director of the new Jazz program at the Northern Westchester Center for the Arts in Mt. Kisco. And he will be teaching guitar at the National Guitar Workshop in Connecticut; this is particularly special, since he was a student there when he was 15.

When doing the pictures for the next issue of NYRSF, I came across this great shot of Stephen Dedman, John Clute, Neil Gaiman, and Terry Pratchett riding the up escalator -- the many attitudes of men in black:

David took lots of great pictures at the Worldcon, but I think this one is the best. UPDATE: Neil says:

As I was going up the escalator, on the friday morning at Worldcon, in company with several shady types I'd bumped into in the dealers' room on the way (viz. and to wit, S. Dedman, J. Clute and T. Pratchett OBE), I noticed that, across the hall, on the escalator going down, was a mysterious figure whose face was obscured by a camera. He was pointing the camera at us. Then the camera came down, revealing the cheerful face of uber-editor David Hartwell. He waved. I waved back.

"That photo'll never come out," I thought, with the prescience and prophetic ability that has made me the talk of the SF-and-futurological community over the years.

The photo is quite wonderful. . . . It looks a bit like it's waiting for the caption competition, or for me, Steve, John and Terry to have a high-profile reunion and release our first CD in decades.

Here's the table of contents of the new issue, which I think is an especially good one: