The CNN headline on the front page read "Thousands missing after hurricane." The accompanying story explains:

Casualty reports have yet to come from at least 70 percent of villages and towns along Nicaragua's swampy jungle coast, where Felix slammed ashore with 160 mph winds on Tuesday, said disaster official Jorge Ramon Arnesto Soza.
. . .
About 11,000 Miskito Indians in the isolated region did not evacuate before the storm. Honduran officials had trouble getting to the remote region, but did manage to evacuate more than 3,100, according to regional army commander Col. Carlos Edgar Mejia of the 115th Infantry Brigade.

I don't have any good ideas of what might be done to help. I wish there were a means by which a clickable map with RSS feeds for press mentions of obscure locations in situations like this. I know how to do that by hand, but not programmatically. 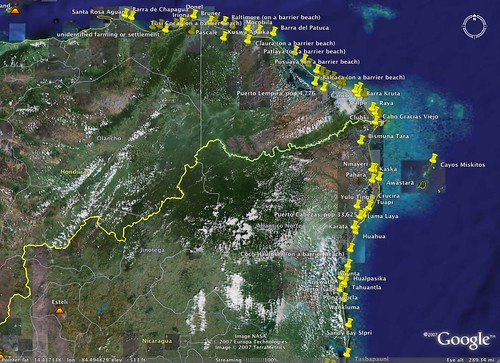 UPDATE: Here's a rough Google Earth map of populated places on the east coast of Nicaragua and Honduras in the area where Hurricane Felix hit. The scariest feature is that a lot of the Honduras coastline in the area likely to be hit hard by Felix is villages on barrier beaches. Hurricanes can just plow right through barrier beach. (Download puerto_cabezas_pop_33625.kmz)