On the Question of Trump's Legitimacy as President-Elect

I hope -- if you are eligible to vote in the US Presidential Election -- that you voted.

If you cast a vote that you now feel called upon to defend, I hope you think deeply about your civic responsibilities as a voter. A ballot is something much more serious than a Like button. But that is all water under the bridge now.

What sane and rational plans the US political class seems to have had are shattered on the ground. And although Hillary Clinton won the popular vote, garnering about 2 million votes more than her opponent, the geographical distribution of the votes has placed on the track to assume power in January Donald Trump, a man incapable of running a country in such a way that we would recognize it as the United States of America we thought we knew. His incoming cabinet is a motley crew, intent more on vandalizing government than running it.

They say hindsight is 20/20. I don’t think we have achieved that clarity of vision yet. However, one thing that is clear is that Obama’s election made many people overly optimistic. Obama himself allowed and cultivated a real death star of a national security apparatus, the NSA, to which he will, apparently, be handing Trump the keys on January 20th.

Did it not occur to Barak Obama or Hillary Clinton or to any of the architects of this system that their panopticon and their assassination drones might, one day, be in the hands of a vindictive narcissist with an enemies list? And that that day might be January 20th, 2017?

As for the rest of us, we squandered a lot of time that might have been used securing the social progress reflected by the election of America’s first black president.

In 2012, for example, Brian Stephenson gave an impassioned TED talk about ending mass incarceration. Mass incarceration is one of the most effective and permanent methods of voter suppression. The United States has the highest incarceration rate of any major country in the world. How can that be, in the land of the free?

There are three factors driving this: 1) The effectiveness of mass incarceration at suppressing the black and other minority vote; 2) the availability of prison labor; 3) the profits to be made by private prisons.

Obama did, by executive order, discontinue the federal use of private prisons.

The 13th amendment ending slavery has a loophole for the use of prison labor. Closing this loophole allowing slavery provided that the slaves are prisoners would reduce another economic incentive that drives mass incarceration.

But laws allowing prisoners to vote and restoring voting rights to those convicted of felonies would eliminate what may be the strongest factor driving mass incarceration: suppression of the vote.

For those not familiar with the timeline, the era of mass incarceration begins shortly after the passage of federal civil rights laws.

So what did my progressive friends talk about for most of the last eight years? There was a lot of talk about micro-aggressions, how nuances of phrase by otherwise well-meaning people might give offence. This gave way to discussions of the political battle over the Hugo Awards, this incursion being led by the writer Vox Day, a notorious racist. Eventually, awareness of micro-aggressions and awards gave way to discussion of macro-aggressions, the frequent shooting of unarmed black men by police, Black Lives Matter.

We had gone from discussing things like the nuances of who might be called a Person of Color and the relative merits of 2nd wave vs. 3rd wave feminism to whether it was OK to shoot unarmed people in the street. Perhaps we should have started with the matter of the shooting of unarmed people and worked in the other direction.

(Parenthetically: I remember -- some time between the micro-aggression era and the Hugo stuff -- trying to engage people I thought would be interested, who had been discussing on Facebook the abstract problem of mass incarceration, with the matter of the use of prison labor in my own community. Upon seeing the discussion, I went down the street with my camera and took pictures of actual prisoners tearing down a structure on the Essex County Fairgrounds three blocks from my house, and I posted this to the discussion. I really don’t know why no one much reacted on the occasions when I have raised this issue.)

Obstructionist Republicans have gamed the system so as to mostly immobilize the Obama presidency in his second term culminating in their refusal to hold hearings for his Supreme Court nominee no matter who he nominated. And the Democratic party offered no real solution to obstructionism except loyalty to the Democratic party in the next election. And I/we (or some large portion of us) trusted them, more or less.

So here we are. We are asked to recognize Trump’s election as “legitimate” and to acquiesce to some kind of “unity.” Trump himself claimed repeatedly and emphatically that the election was “rigged.” Week by week, during the election, more hacked information in the service of Trump was released to the public. So. If I understand this correctly we are to believe the proposition that Trump told lies about the integrity of the voting process as a condition of accepting the proposition that he will be the legitimate President of the United States. (This reminds me of the logical problem of judging the truth of the statement “I am lying.”) Why not just take him at his word?

Why should we recognize Trump’s legitimacy before Obama—whose legitimacy has constantly denied by the GOP despite his being democratically elected twice—is allowed to appoint Scalia’s replacement to the Supreme Court? Otherwise it would seem the legitimacy of a president entails being white.

And then there is the matter of the FBI’s interference with the democratic process, interceding on Trump’s behalf at the 11th hour. . . .

Recapping: we are asked by a political party that refuses to recognize the current sitting President as legitimate to accept the legitimacy of a President-Elect who claimed the election was rigged, who was helped extensively by hackers (possibly in the employ of a foreign government), who lost the popular vote, and whose dishonesty we are asked to take as a given.

Why would I do that? Why should any of us do that?

I think, instead, we should start securing voting rights, and agreement by all that it is not OK to shoot unarmed people in the street, and that the FBI has no place intervening in the Presidential election, and so on. And once all of this is accomplished, if the matter of Trump’s legitimacy is still on the table, we can take it up then.

Posted on Sunday, November 13, 2016 at 11:17 AM in Alienation, Political Surrealism, Politics | Permalink 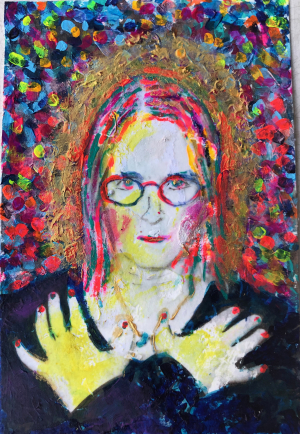 Self portrait, May 2020 after a photo by Emma Dodge Hanson