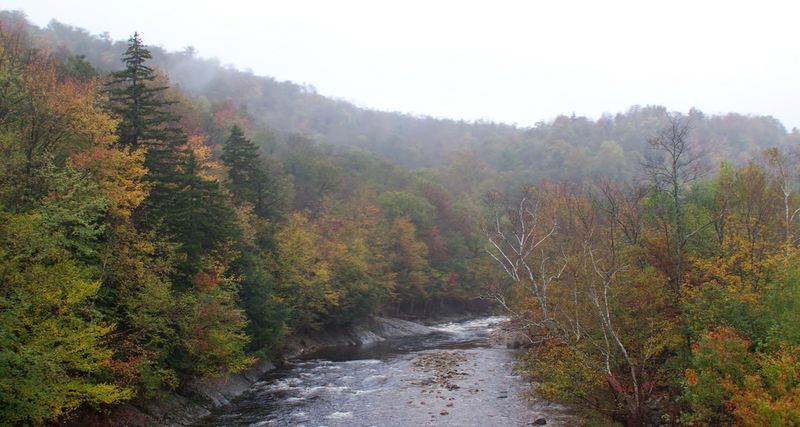 Friday and Saturday, I spent a lot of time driving around Vermont. I also spent a lot of time thinking while driving. I was thinking about whether to expand on my most recent blog post and what it is safe to say. These were the most beautiful drives I have ever taken in Vermont.

The leaves were at peak and the air was still, so there were many reflections. (Unfortunatly, I didn't stop to take pictures.)

Friday, I had a belated appointment with the orthopedist at Fletcher Allen, who told me that my month-old fracture in the second metatarsal of my right foot won't heal unless I wear an orthopedic boot for a month. (This prospect makes me unhappy, especially as someone who spent most of the summer with my arm in a cast.) And later in the day, the kids and I set out for Marlboro College so Peter could attend their Open House on Saturday.

Calculating backwards from the 9AM Saturday start, I realized we would have to leave at 5:30 AM if we didn't drive part of the way Friday afternoon. I had hopes of getting us to White River Junction where I spent a week last August at the Graphic Novel Workshop at the Center for Cartoon Studies.

As I drove, I turned certan phrases over in my head like agates in a rock polisher. One was Joanna Russ's paraphrasing of Bion of Borysthenes from The Female Man:

As my mother once said: the boys throw stones at the frogs in jest. But the frogs die in earnest.

The longer quote is here.

Another of the phrases, this one being revised and refined:

Over the past five years, women with established careers in the science fiction field have been treated like they are cheap, plentiful, and easily replaced; disposable as light bulbs. And this treatment has come mostly at the hands of other women.

In Middlebury, I stopped in at The Vermont Bookshop to see if I could sign copies of Hieroglyph. Unfortunatly we had missed them by 20 minutes. But Middlebury was having an Art Walk, and so we stopped into one painter's studio before getting back in the car.

About 10 minutes down the road, Peter noticed that the cell charger in the car wasn't working anymore. There is a design flaw in the iPhone 5 charger such that if you are charging from the car cigarete lighter, if the phone end of the charger touches metal, you can blow fuses in your car. That happened; it has happened to me before, and it has been my experience that this can cause other problems in addition to your phone not charging. The particular problem we had crossing the Green Mountains was that when the car was low on gas and we were going up steep inclines, the gas was not flowing evenly to the engine. I stopped for a moment by the road and let a car pass me.

The car that passed us hung back and stuck with me until we stopped for dinner; my sense is that the other driver was making sure we didn't get stuck in the middle of nowhere. That was really nice.

The restaurant we stopped at for dinner was The School Street Bistro. We had a delicious meal. I had the kebabs. Peter had ordered their garlic soup which turns out to make a terrific dipping sauce for the beef.

Once we logged onto their wifi, we discovered we were in Rochester, VT and that the closest place to stay was two blocks away, the Pumpkin Patch B&B, which was in fact the only B&B I had ever stayed in before in the entire state of Vermont. We were tucked into cozy beds by 9PM. (Breakfast in the morning was tasty pancackes. Lovely people, nice place. Highly recommended.)

We arrived at Marlboro a little late. Peter had forgotten to pack any warm clothes, and so after the session Marlboro 101, we set out for the college store to get him a sweat shirt. From there we passed through the tent in front of the Admissions Office where a math professor was pressing fresh cider. And then we continued on to the greenhouse and farm. There was a bus parked in front of the Green House associated with the Expedition Education Institute: students can go on semester-long field trips, camping out every night. There we met a philoposhy professor who turned out to be a friend of the teacher who has been tutoring Peter for the past five years.

After a delicious lunch of locally grown food, we went up the hill to the science building to hear a talk on skulls and bones by Jaime Tanner, the biology professor with whom Peter had spent a week this summer at the Marlboro summer program. She is an expert on the spotted hyena, so some of what she talked about was spotted hyenas, and in particular how the structure of their society is engraved in the structure of their skulls.

Though their ancestors were scavengers, they kill themselves most of what they eat. They have complex matriarchal social structures; she explained that as the size of the social structures grows, so does the competition between females.

One takeaway: Never get bit by a hyena. The biting force of a spotted hyena is about 500 times that of a human (if I did the math right). She also emphasized that hyenas are much more worthy creatures than their popular reputation suggests.

I was, of course, struck by the image of fierce competition engraving itself in the structure of their skulls. And I was thinking about the ferocity of competition between women in our field, and that the advent of the Internet as a social venue, and how that suddenly, radically increases the apparent size of the social structure. Am I comparing women writers to hyenas? Only in the nicest possible way.

Which brings me around to the subject of the young writer whose blog is or was entitled Requires Only That You Hate whose name was apparently unveiled this week. I have nothing personally against her. As far as I know, she never went after me. (Perhaps ignorance is bliss; if I am wrong on this point, don't enlighten me.)

When I enountered her pseudonymous writings two years ago, she was writing vicious over-the-top  attacks (framed as reviews) on talented, accomplished writers who I respect and whose careers I value; I was very upset by this. I was upset not so much because someone was Mean on the Internet, but because of the social acceptance she seemed to enjoy even as a pseudonymous writer of invective.

She was playing to a crowd, a pre-existing mostly female audience with a taste for blood clothed as speaking Truth to Power. I'd go so far as to say that she rose to what has been called a "celebrity troll"* because she was willing to go farther than anyone else in her rhetoric. And somehow this translated to her getting on the Campbell ballot for Best New Writer under the name she publishes her fiction.

Now that her professional name is known, I am reading of expressions of concern that she is being harassed; reading other writers reassuring her that she is talented, that she said things that were right, that they will go out right now and read her book so that she will not be unfairly deprived of awards in the future. What kind of a world are you trying to build? While at some point it may be appropriate to tell a psychologically fragile young writer, as she apparentlly is, all these things, THIS IS NOT THE TIME. Let her learn from her mistakes.

Requires Hate became what she is because the science fiction field socialized her that way. It taught her that harassment in the form of relational agression under cover of social justice would go completely unpunished and in fact would allow her to rise in the hierarchy. It taught her that behaving that way was the way to get on award ballots and win awards. And some of you don't seem to be willing to let go of that message.

The clear path that is being offered her is one in which she can harass other writers, now under her professional writing name, and at the same time continue to advance professionally. This is wrong.

I suggest, instead, telling those she attacked and those attacked by her predecessors who gave her the idea that this was OK that they are smart and right and then buying their books. Do that for 25 people, and then perhaps you have earned the right to go back and console Requires Hate.

*Note my objections to calling harassers "trolls" in my previous blog post.