Tangent review of "Am I Free to Go?" 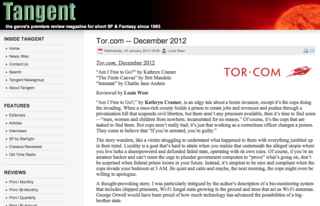 My Tor.com story "Am I Free to Go?" received a very favorable review from Lois West, a short fiction reviewer for Tangent.

“Am I Free to Go?,” by Kathryn Cramer, is an edgy tale about a home invasion, except it’s the cops doing the invading. When a once-rich county builds a prison to create jobs and revenues and pushes through a privatization bill that suspends civil liberties, but there aren’t any prisoners available, then it’s time to find some—“men, women and children from nowhere, incarcerated for no reason.” Of course, it’s the cops that are tasked to find them. But cops aren’t really bad; it’s just that working as a corrections officer changes a person. They come to believe that “If you’re arrested, you’re guilty.”

The story wanders, like a victim struggling to understand what happened to them with everything jumbled up in their mind. Lucidity is a goal that’s hard to attain when you realize that underneath the alleged utopia where you live lurks a disempowered and defunded failed state, operating with its own rules. Of course, if you’re an amateur hacker and can’t resist the urge to plunder government computers to “prove” what’s going on, don’t be surprised when federal prison looms in your future. Instead, it’s simplest to be nice and compliant when the cops invade your bedroom at 3 AM. Be quiet and calm and maybe, the next morning, the cops might even be willing to apologize.

A thought-provoking story. I was particularly intrigued by the author’s description of a bio-monitoring system that includes chipped prisoners, Wi-Fi fungal mats growing in the ground and trees that act as Wi-Fi antennas. George Orwell would have been proud of how much technology has advanced the possibilities of a big-brother state.