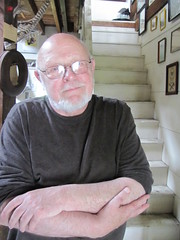 A few days ago, Peter, Elizabeth and I paid a visit to the artist Ted Cornell's art farm, Crooked Brook Studios. The proximate reason for our visit was to collect water samples from his wetland for Westport Central School's third graders to look at under the microscope tomorrow. Peter, who is in 8th grade, has been doing a biology independent study since January and wants to share with the 3rd graders some of the things he's learned.

It was a beautiful day at the art farm, and we had a great time. While exploring, we were accompanied by both my dog Sunshine and by Ted's photogenic black lab, Lily. Here are some of the pictures I took.

The children set out with nets and buckets, past "Rotating Installation of a Minimally Processed Found Object," toward "Floating Stone Cone." 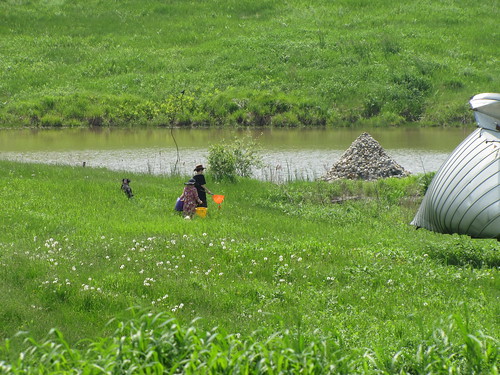 Crooked Brook Studios was first known as an art farm in connection with the Adirondack Harvest Festival’s Farm Tour in 2005. Becoming an art farm encouraged talking about these sculptures as if they were bio-organic eruptions, a conceit which is encouraged by their leisurely and seasonal growth patterns. They began appearing in the wetlands below the pond, and up near the barn and then in the pond, and then up behind the barns, in an area now known unavoidably as the sculpture garden, about five years ago. They were first known as large slow jokes, and they move in the wind and sport a jaunty devil-may-care attitude. They are junk sculptures making use of previous existences. They are environmental sculptures suggesting the creation of a transcendental asylum.

From the perspective of children with buckets, there for creatures and water-fun rather than art, they are landmarks that structure the farm. Destinations. Trailmarkers. 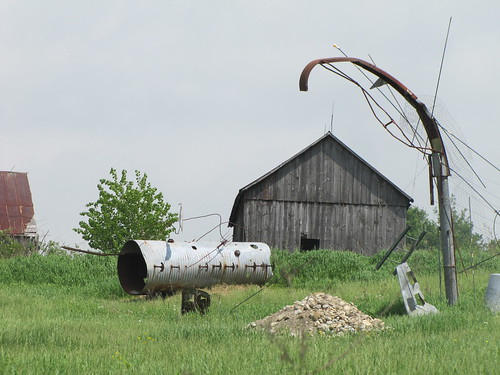 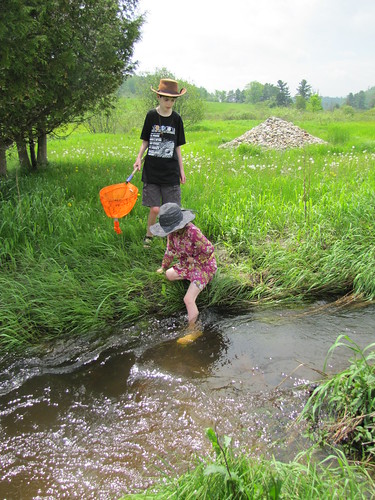 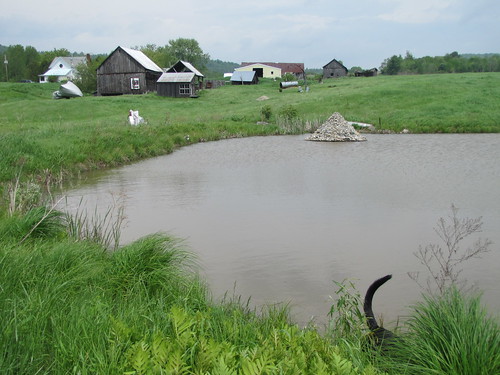 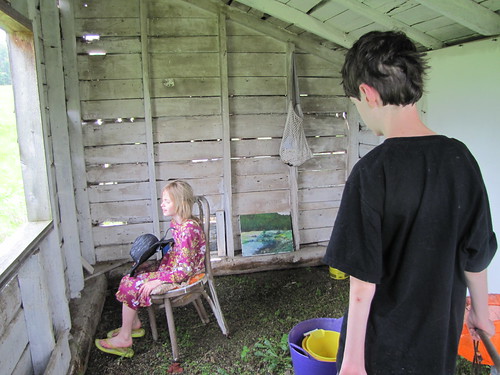 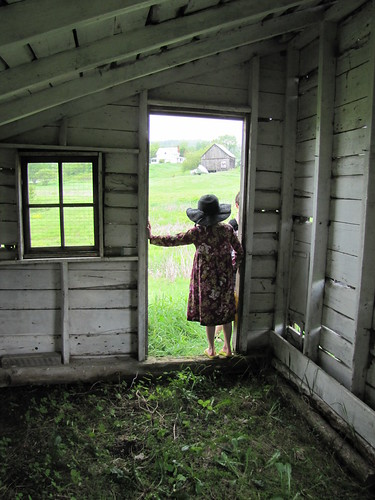 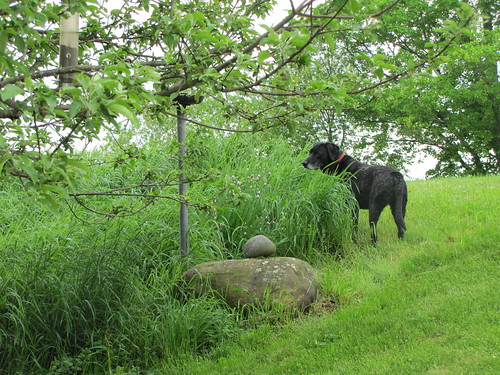 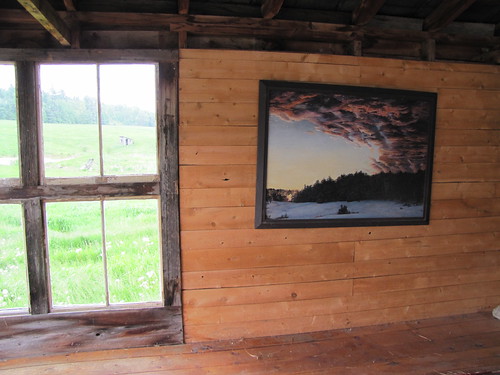 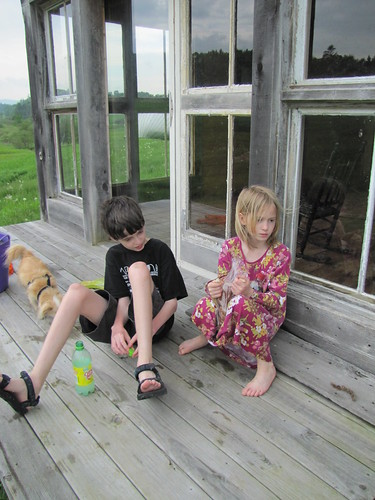 The complete photoset is here.

Goodbye, Joanna:
On the Death of Joanna Russ

In memory, my relationship with Joanna Russ takes place mostly in one room, a building on the University of Washington campus whose architect aspired to be post-Euclidean. It was a poured cement building that was hard to find your way around in, and its rooms were oddly shaped. Joanna's office was there.

When she met me in about 1982, I was a tightly controlled skinny blonde with bad posture, a big vocabulary, and a flat affect. I remembered the books I'd read by the cover art, not by title and author. I'd read really a lot of science fiction, but I wasn't sure what. I knew I'd read all the Poul Anderson books on my dad's shelves. I counted them: there were 42.

I remember what she said about the first piece of fiction I turned in in her class: She said that most of my sentences began with "And then . . ." and that my sentences were all the same length.

Many of her students were scared of her, but I was fascinated. At first I would think up clever questions to ask so I could go talk to her during her office hours, and if no one else showed, I would stay for the whole two hours. Eventually, I learned that I didn't need to prepare. She was happy to talk to me for two hours whether or not I formulated something in advance.

She was on a lot of medication and so had very little short-term memory.

In 1984 or 1985, Amy Thomson had a birthday party. Joanna showed up in a really good mood and sat on the couch and began to talk and tell stories, and various of us gathered around to listen.

I remember her telling this story about someone's polydactyl Maine Coon cat with six or seven toes on each paw that climbed a screen door and then couldn't get down and was stuck there half way up the screen (gesture of hands held up like paws in the screen) and the cat said meow meow (long drawn out meows). She was amazingly on that night.

It got later and later, and the circle around Joanna got smaller and smaller, until it was just three of us: I was going to listen for as long as Joanna was going to talk. And at some point birds started to chirp, or it began to get light. Joanna looked at her watch and said, Oh my goodness, it's five thirty in the morning and went home.

She was out sick for two weeks after that -- a woman with red hair whose name I've forgotten taught her class for those weeks. Joanna's health was not good enough to allow for staying up all night at parties.

And when she came back, I did my usual thing of going to her office hours and listening to her talk about whatever she wanted to for two hours. And she told me about this great party she'd been to, in immense detail, without ever realizing that the reason she was telling me this is that at that party I had sat there and listened to her talk for 9 or 10 hours straight.

I wasn't offended that she didn't remember that I'd been there because if you dealt with Joanna much, you just didn't expect much of her short term memory because she mostly didn't have one; it was a side-effect of her anti-depressants.

Our office conversations went on for about two years. When Clarion West came around she pointed me in that direction, and especially in the direction of her editor, David Hartwell, whom I think she adored. It was fun to be with them simultaneously, because when David was around Joanna was sharp and focused and animated.

In our later conversations, we talked a lot about horror and about haunted house fiction, The Haunting of Hill House particularly. When I moved to New York City in 1985, I continued working on that concept, which I had also been corresponding with David about.

I don't know what Joanna got out of our conversations, but for me they were transformative and something for which I am very grateful.

I was not in contact with her after she moved away from Seattle, and I wish I had taken some initiative there. But despite the intensity of our conversation, the relationship remained defined as teacher and student, and so I didn't feel it was my place to reach out. I wish I had.