I've created a Flickr photoset for our Confluence photos  and will add more later. Here is the scene so far: 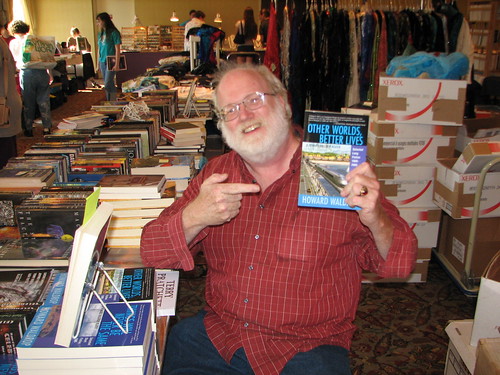 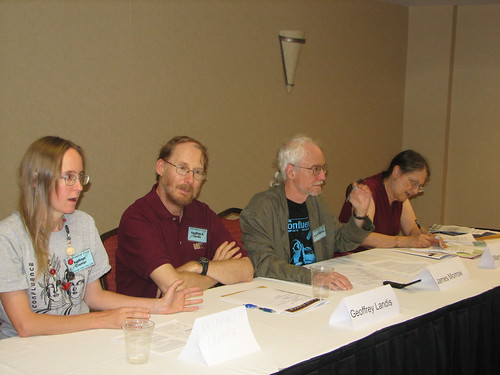 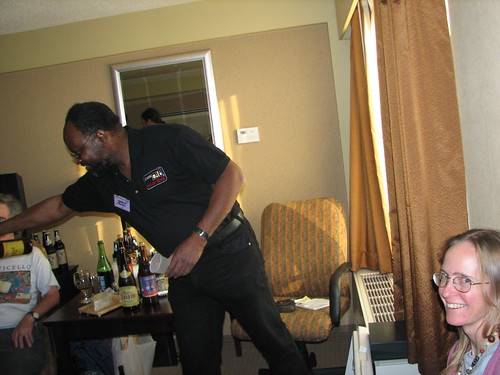 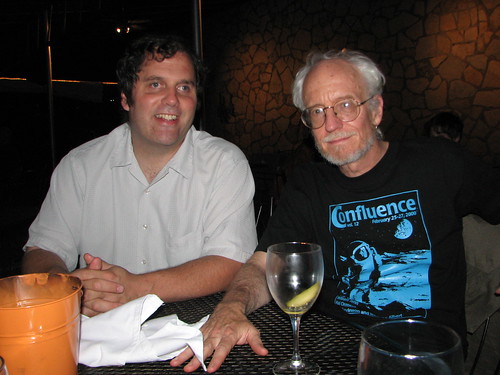 Charles Oberndorf & James Morrow at dinner on the terrace. 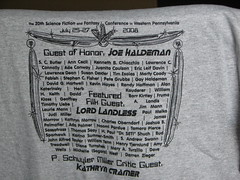 I have arrived at Confluence and have my first program item in  about two hours, a panel which I proposed on whether the Internet is essentially fungal, which I think it is.

Here's my program schedule. I'm expecting this will be a lot of fun.

Friday   6:00pm  Is the Internet Essentially Fungal?
Kathryn Cramer   (M)
Geoffrey A. Landis
James Morrow
Mary A. Turzillo
In his book  Mycelium Running, mycologist  Paul Stamets argues that fungi are nature's Internet. Perhaps it's really the other way around. Is the Internet essentially fungal? Discuss from the SF  worldview (and perhaps from Lovecraft's as well).

Saturday 4:00pm  Trends in Short Fiction: From Original Anthologies to Online Fiction
Lawrence C. Connolly
Kathryn Cramer   (M)
David Barr Kirtley
Paul Melko
Karina Sumner-Smith
Every year, we hear predictions of the death of short fiction. Yet, every year, some of the genres best works are not novels but short stories and novellas. And more new outlets are appearing.  There are more good original anthologies than we've seen since the golden  years of Universe, New Dimension, Orbit, and Dangerous Visions. And online markets are flourishing. The panel looks at some of the best  new short fiction, where it can be found, and the prospects for the future.

Sunday  12:00 noon Real Life Utopianism
Kathryn Cramer
Joe Haldeman
James Morrow   (M)
Kathryn Morrow
Charles Oberndorf
SF as a literature is  strongly concerned w /utopias and dystopias. How do we individually relate these visions to our real lives? What  have we done lately at  achieving utopia?

Right now I'm in my hotel room, having eaten lunch andd taken a shower. Against my better judgement, I spent a few minutes on the Internet and found myself trying to parse why    Violet Blue is trying to get a restraining order against some guy who had never previously impinged on my consiousness  (for his Wikipedia edits having to do with her Wikipedia entry).  What he had done to upset her looked to me simply like standard fairly reasonable Wikicrat behavior.  I never did figure out what this particular fuss is supposed to be about.

When oh when will I learn that I really don't need to try to follow the threads of this kind of Internet  mycelium? Fungal. Yes, the Internet is fungal. 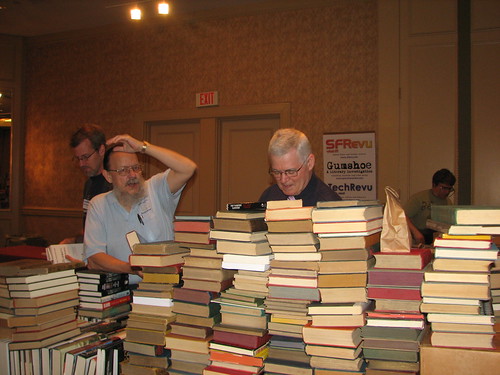 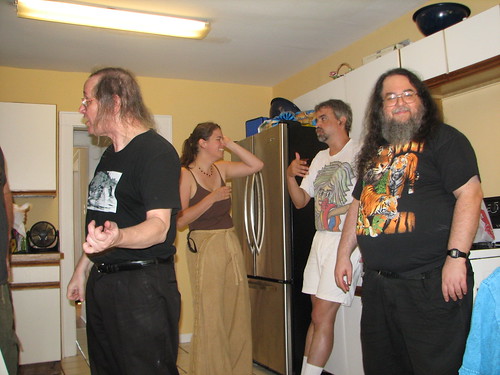 (Is Donald gesturing, or is that air guitar?)

Now, I am off to Confluence in Pittsburgh, where I will be  P. Schuyler Miller Critic Guest of Honor. Wheee! (Be there or be sqaure!) 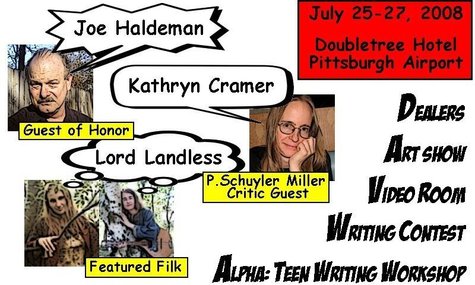 (After that, I'm going back to the Adirondacks to rise with the sun and plant pretty flowers in the mountains.)

Greetings from the shores of Lake Champlain 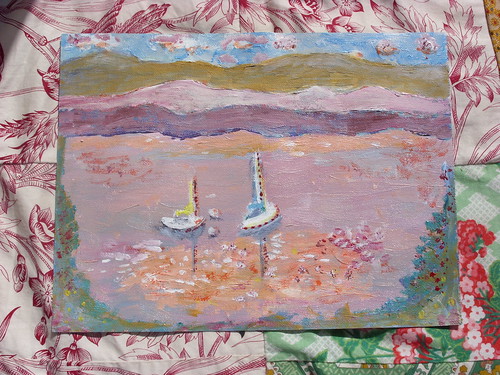 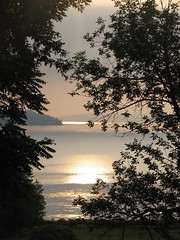 I've been having a terrific summer so far, mostly without regular consultation of the Internet. Every once in a while I poke my head in to Computerland and say "God, what a mess," and I go back outside to plant pretty flowers in the mountains or sip coffee while watching the sun rise over the lake.

I knew far in advance that this summer was going to be among the worst of times to be on-line because we are in the midst of a presidential election. Last time around, blogs proved that they could be key players in the outcome of the election, and so this time it was pretty clear that in addition to the usual Internet nasties, there would be people out there stirring up trouble in the blogosphere who were being paid to cause trouble, to take down bloggers perceived to be supporting of one candidate or another, people paid to say what they were saying, and meetings around conference tables in which promoting particular political agendas in the blogosphere would be discussed. And there would be all kinds of unnecessary grief as a result. As I put it to some of my friends back in February in a conversation at Boskone, this would be an election in which people's lives would get destroyed because of their blogs. I made a conscious decision to opt out.

Things are playing out a little differently than I expected, inasmuch as I've followed the goings on, but the on-line world is full of unnecessary awfulness this summer. It seems like every time I'm on-line for more than just to check my email, I end up spending time trying to parse some blogwar or other to see if this is something I need to be involved with. The answer is inevitably "NO", and soon I will learn not to try to parse them at all. But I am still having a hard time coming to grips with what a brain-sucking parasite one's computer can be.

For the past two years, I have been fairly reticent about what has been going on in my life because I have been cyberstalked by a woman who is obsessed with me. She watches me so closely that in May she ridiculed my new author photo within two hours of my posting it.  She picks Internet fights and then theorizes on-line that I must somehow be involved with the resulting blog wars she involves herself in. She has about ten blogs and tries to make herself look like a crowd. A week or so ago, on a single day, she wrote about five posts mentioning me in various paranoid nutty contexts. She also began developing conspiracies theories about people I am photographed with. One author whom my husband publishes and who is a friend of mine, but whom I haven't seen much of since he moved to the West Coast a decade or so ago, was a major figure in her fantasy life and conspiracy theories four a couple of months earlier this year. She also took out after one of my kids, but backed off after I contacted her ISP and law enforcement. Unsurprisingly, she is front and center in one of this summer's many political blogwars and apparently blames me.

Having given myself some breathing space, I realize that inasmuch as I have any desire to be on-line, I would like to be able to talk about what fun I've been having. Last fall, we bought a house overlooking Lake Champlain in the Adirondacks. I have been spending a lot of time up there. 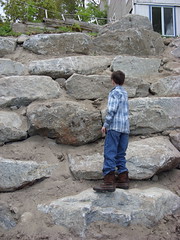 The house came with two failing retaining walls, which we have just replaced with amazing dry-laid stone walls made of beautiful boulders studded with garnet. The yard was completely restructured as part of this process, and so I have been planting a yard from scratch which is a fascinating process. I've been learning about soil PH and soil structure. I've been mail-ordering beneficial fungi from fungi.com and moss for the shadiest of our walls from Moss Acres. We planted special grass seed. I've most recently put in some raised beds and planted rose bushes. I've been getting up with the sun and working on the yard for an hour or two before anyone else gets up. I feel so wholesome and healthy. 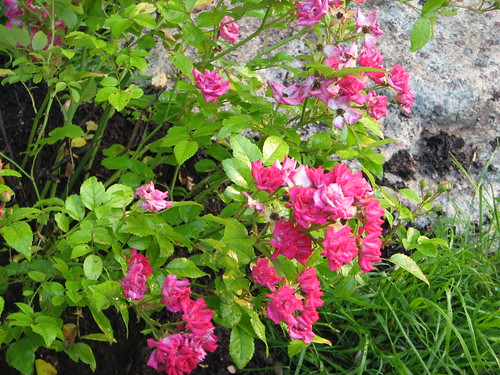 The town where our house is is a very friendly place, and if I want conversation , all I need to do is walk out the door. People will stop and talk. It is tremendously socially nurturing. I wish the blogosphere could go back to being more like my small-town front porch. But I think I'll have to wait until after the election for that. In the meantime, peace be with you.