I've found a fascinating, if sometimes very slow, tool on Wikipedia: the External links tool. It's probably what Certain People used when they attempted to de-link All Wikipedia from nielsenhayden.com. It's most common use seems to be for rooting out spam.

I've discovered that if you really try and are patient, it can be used to calculate the total number of links from Wikipedia to a given domain for domains with five- and six-figure numbers of outgoing links. I've determined (though patience and effort) that there are about 61,000 links from Wikipedia to the domain nytimes.com, but close to 147,000 to  wolfram.com (mostly because of the heavy use of MathWorld and ScienceWorld and what looks to be a very elaborate and perhaps difficult attempt to match up resources across websites with the purpose of making use of material on the target site on a large scale).

I am curious if there are other tools that work better for the purpose of evaluating Wikipedia's out-going links. (It seems to me that this is sort of like the reverse of the Wikipedia scanner.) Because of the Wikipedia no-follow policy, I presume that most external search engines are prohibited from collecting this kind of info and from giving this bit of transparency.

FURTHER COUNTS: a ranked list can be found HERE

(These numbers are all for en.wikipedia.org.)

Yesterday, when picking my son up in Chappaqua, NY at middle school, I saw a girl about twelve drop an iPhone on a stone floor. Afterwards, she and a friend were marvelling, "It's even more cracked than before." So I asked my son if he'd seen many people with iPhones at school. He said he wasn't sure which cell phones were iPhones but reported that lots of kids had cell phones.

He did however volunteer that he'd seen an iPod Nano, complete with headphones, floating in a school toilet recently. I do wonder how many (hundreds of?) thousands of dollars of electronics are circulating in  that school on an average day. Should your iPod fall in a toilet, here is some helpful advice.

(My daughter made the Kindergarten newsletter for taking her big brother's iPod to school. We do not own an iPhone.) 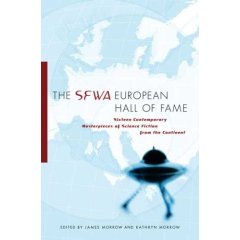 An interesting interview by Jeff VanderMeer with James & Kathryn Morrow, editors of The SFWA European Hall of Fame, about the process of editing an anthology. (David and I are reprinting a couple of stories from the book in our Year's Best SF.)

A line from the NYT that seems to have escaped from an April fools edition: "Typically, authors earn royalties of 15 percent of profits after they have paid off their advances."

Typically, authors earn royalties of 15 percent of profits after they have paid off their advances.

There are a couple of errors in this sentence, astonishing from someone who covers publishing for The New York Times.