Patrick Nielsen Hayden reminds us to get our ballots in:


Those of you who regularly nominate and/or vote in science fiction’s Hugo Awards probably don’t need to be reminded, yet again, that this year’s deadline for nominations is midnight PST at the end of this coming Saturday, March 1. Or that you’re eligible to nominate if you’re either a member of the upcoming World Science Fiction Convention in Denver, or were a member of last year’s convention in Japan. Or that if put it off until the last minute based on the idea that you can nominate online, you may not be able to get through.

I was having a look at the SF editors Wiki which I heard about last week. This is a Wiki that the world needs because Wikipedia is not well-suited for biography, and particularly not biography of working editors, since their contributions to literature tend not to well-documented in what Wikipedia defines as "reliable sources" that are easy to find on the web. (Hence the brevity of the bios of such major figures as Malcolm Edwards and Susan Allison.) Both Teresa Nielsen Hayden and I have gotten into nasty fights with Wikipedia admins when editing bios of science fiction editors. So I am all for this project and hope it expands its focus beyond "emphasiz[ing] editors still living and editing."

The main page of the site has a passage that nearly caused me to snort coffee through my nose:

Do not use [this site] to stalk editors. In fact, just don't stalk editors at all. They don't like it, they don't deserve it, it's liable to get a sizable community of people considerably irked with you (some of whom play with swords and axes in their free time) and it absolutely will not get you published. Rather the opposite. Just in case that needed to be said.

Well, gee, I didn't know we editors were protected by people with swords and axes, but I guess we are, now that I think about it. Goodness. Stalkers, be advised.

Anyway, I think this wiki is a great idea and that y'all should get accounts and fill it full of true and useful information. 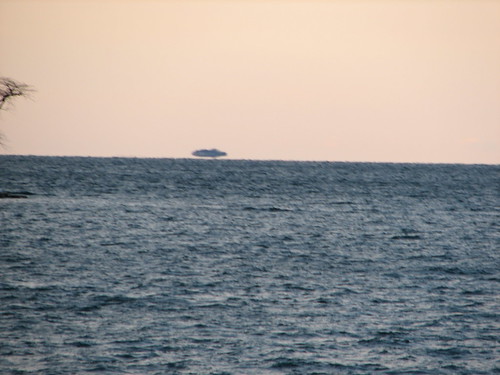 We took this picture of a cigar-shaped object hovering over Lake Champlain last weekend from the Essex Ferry coming back from Vermont. It is an island.

Below, see how the "sky" seems to underly the coastline? Neat, huh? 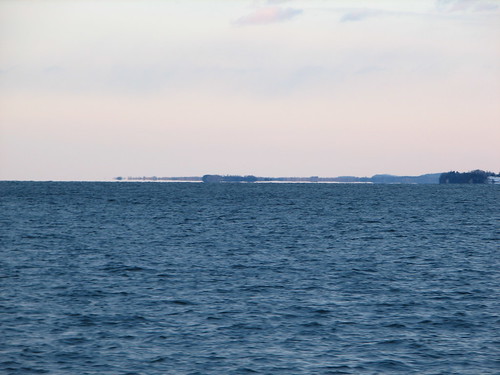 For the Hugo Winner Who Has Everything

Side table by Stephen Huneck, best known for his sculptures of dogs. 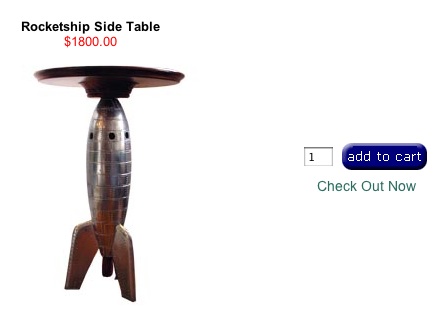 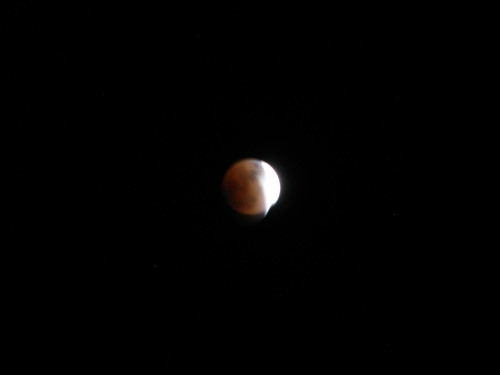 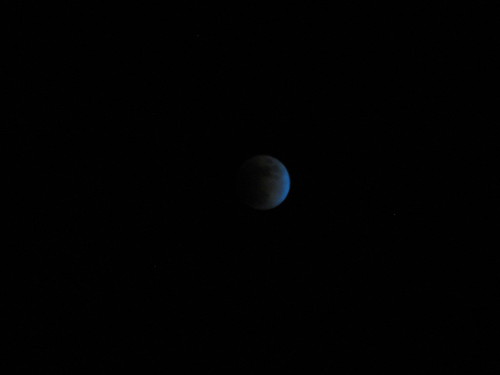 Temporary outage on the NYRSF site

I'd messed up some DNS stuff on theNYRSF site and Network Solutions tech support has corrected it for me, but it may take up to 24 hours for their solution to propagate through the Internet. So there is a temporary outage. 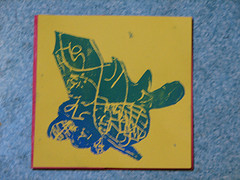 My kids are passionate about Valentines Day. Every year they spend a lot of time hand-making valentines. In years past it has seemed, when the valentines came home from school, that mine were among the few children around here who did this, in that most or all of the other valentines were store-bought. 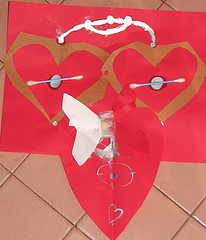 This year, about three weeks ago, I bought a ream of red paper and since then the house has been awash in sheets of red paper with their hearts cut out. Usually, in the home stretch, I carefully shepherd the kids through organizing their creations so that everyone they intend to give to gets a valentine. This year, the flu has been circulating in the house in the five days before Valentines Day. (Apparently there's an epidemic.)

(Also, I should admit that last fall when I was trying to round up flu shots for me and the kids, I wasn't persistent enough. The only one in the family who had this season's shot is David.)

This morning began with tears. It seems that while both kids had spent a lot of time and paper making Valentines, in her exuberance, my five year-old had regarded the products of my ten year-old as raw material for her art. Most of his Valentines got recycled into hers. I was only vaguely aware of this until this morning when it was too late to do anything about.

Next year we'll all get flu shots. And next year, I will orchestrate the festivities more carefully. Oh, well.

(Above left: a Valentine Peter made for his father in art class at school; above right: one of Elizabeth's lavish creations.)

Say It with Math!

Did the dog eat that box of chocolates you bought? Or is your love on a higher plane of existence than can be expressed by mere candy, champagne, diamonds, lingerie, sonnets, teddy bears, flowers, and fine dining?

Then Wolfram Research has just what you need: Equations for Valentines from the Wolfram Demonstrations Project! 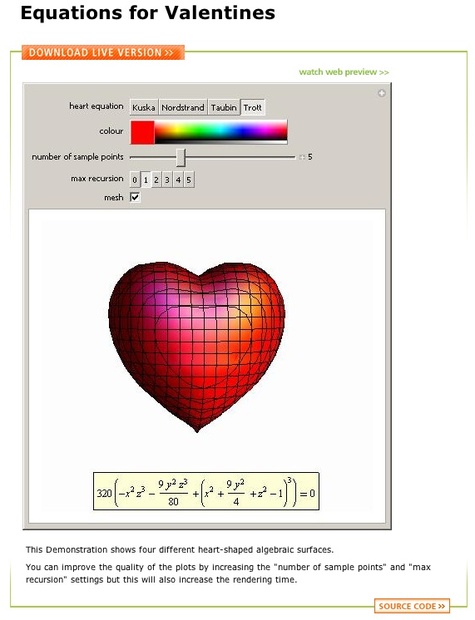 (What other Valentine comes complete with source code?)

(Via Walking Randomly and the Wolfram Blog.)

Given the impending 20 year anniversary of The New York Review of Science Fiction, I thought it was time to act on some of my ideas of what might be done about its website and do a makeover. 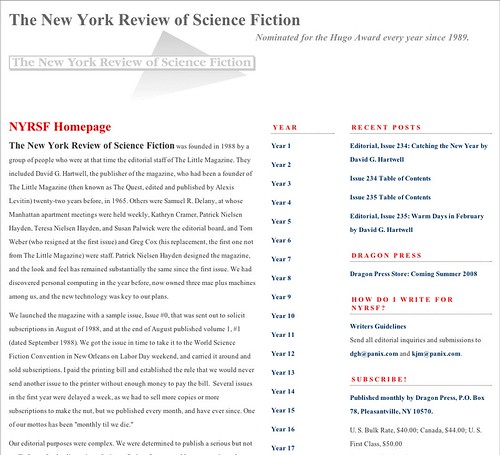 (The make-over is the easy part. The tables of contents of 235 issues, and if I'm insane, pages for each article, are still to be done. I have this fantasy of figuring out how to solve this problem using Mathematica. I think Theodore Gray may have the wisdom I am seeking.)

UPDATE: The NYRSF site is temporarily down while I straighten out the damin mapping DNS stuff with network solutions. It will be back up within 24 hours. 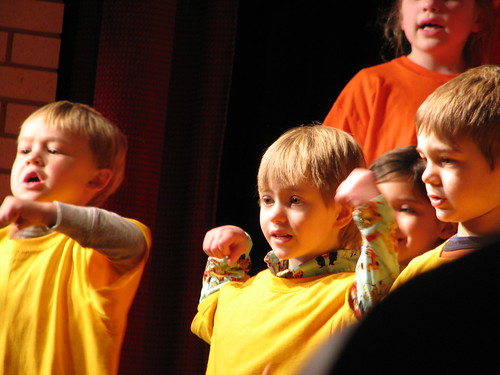 Here is the table of contents for the forthcoming Year's Best SF 13 edited by David G. Hartwell & Kathryn Cramer: 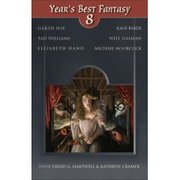 Here is the table of contents of the forthcoming Year's Best Fantasy 8 edited by David G. Hartwell & Kathryn Cramer: