The Homework Monster that Ate Our Lives

Cory Doctorow blogs a book I need to buy, entitled The Case Against Homework by Sara Bennett & Nancy Kalish. Based on the book, Cory reveals some of the evils of No Child Left Behind that we just paid a lawyer to hear about. Our education attorney explained to us that there was no way no how I was going to be able to hold the school district to its own standards on limiting homework and that No Child Left Behind was to blame.

And so we have a 4th grader and his mom, pushed to our wits' end by excessive homework, and an assessment by someone we paid $300 an hour of my son's current educational situation that deploys the technical term "train wreck."

We are on the hairy edge of bailing out of our top-ranked school district for which we pay munificent taxes primarily over the homework issue. Our alternatives are not good.

I need this book.

A criticism is not the same thing as an "attack." Making Light, a notable and oft-cited site, hosts thousands of posts by several authors, many of them germane to Wikipedia articles, written by people who have deep knowledge of their fields. None of the references you've removed attack you or other Wikipedia authors. Doctorow 23:43, 27 May 2007 (UTC)

Please also note that the 3RR rule does not apply to removing attack sites. I will continue to revert the restoration of links until the matter is resolved. ·:·Will Beback ·:· 23:46, 27 May 2007 (UTC)
Are all criticisms attacks, in your view? If the New York Times published a critical remark about Jimbo, would it be necessary to remove every single link on Wikipedia to nytimes.com until they retracted the article? Doctorow 23:47, 27 May 2007 (UTC)

Critical terms are not derogatory. I don't see anything particularly revealing in the "personal information." This is unseemly. You appear to be attempting to punish someone who dislikes you by removing references to her site. This seems like retaliation, not an effort to improve Wikipedia. What's more, the repeated demand to change something posted to her site seems like extortion, not an attempt to improve Wikipedia. TNH claims that Wikipedians pursue petty vendettas at the expense of quality. Please conduct yourself in a way that does not lend itself to this interpretation of the project.Doctorow 23:57, 27 May 2007 (UTC)

On the contrary, I'd say that TNH has acted punitively in revenge for perceived problems with Wikipedia. Regardless of her motivation Wikipedia does not tolerate personal attacks on editors. If she removes the personal attacks then I won't object to restoring the links where appropriate. ·:·Will Beback ·:· 00:00, 28 May 2007 (UTC)

I disagree. The distinction between "personal attack" and "criticism" is subjective and editors should err on the side of caution, especially when they are the subject of criticism (in such times, it is hard to be neutral and to appear neutral). Perhaps you should try to resolve this with TNH. In any event, it is simply a fact that, for example, TNH is a prominent member of the LDS, removing her from this list because she doesn't like you very much is clearly not the intent of WP:NPA#Linking to attack sites. Redacting relevant facts from the encyclopedia because the person who uttered them doesn't like you isn't a good way to produce an encyclopedia. Doctorow 00:06, 28 May 2007 (UTC)

I didn't remove her name. I removed the link to the attack site. If you think "talentless troll" and "pismire of some variety" are criticisms then I'd be curious to know what you regard as an attack. The publishing of personal information is an attack, there's no debate about that. On the other hand, I have never called TNH any name, so this is unprovoked. ·:·Will Beback ·:· 00:10, 28 May 2007 (UTC)

Please stop reverting these edits. If you haven't already, you should read WP:3RR. Also, please don't paste an article's text into a talk page, as you've done here: Talk:Vanity press. 00:13, 28 May 2007 (UTC)

My apologies for pasting into the talk section -- it was an error. Thank you for fixing it. Please stop removing links to Making Light from articles where they are germane. Doctorow 00:15, 28 May 2007 (UTC)

You are a Wikipedia editor; this does not confer upon you the right to edit other peoples' websites, too. This is extremely unseemly and has the appearance of an abusive vendetta. I don't believe that you, as the subject of the criticism in question, are able to appear or maintain neutrality in this matter. Elsewhere, I mentioned that the litmus test you're proposing for an "attack site" (someone posts something critical about you on a message board) would disqualify Slashdot should someone on its message boards say something nasty about me. The Boston Globe has message boards: if TNH posted something critical about you there, would you remove every link to the Boston Globe from Wikipedia? Doctorow 00:22, 28 May 2007 (UTC)

JulesH's Talk page has some good material on this:
"(edit conflict) That policy states that "Links or references to off-site personal attacks against Wikipedians should be removed". None of the links you have removed are to personal attacks, but rather to useful information that is relevant to the articles at hand. I don't have time to examine the entire site for such personal attacks, so I will assume that you're not making it up and there is one. It doesn't matter. The policy only applies to links directly to the attacks, not to entirely different content on the same site that happens to also contain such an attack. JulesH 00:22, 28 May 2007 (UTC)"

Please replace the edits to Making Light. Doctorow 00:27, 28 May 2007 (UTC)Bebeck took to vandalizing Teresa's Wikipedia entry in the first place last night in retalization to my objection to his interference with my adding my 2007 books to my bibliography. He considers that fact that I keep publishing books to be "excessive." I told him to get lost.

From James Nicoll commenting at Cool SciFi with regard to anthologies published by DAW Books:

Mike Resnick & Martin H. Greenberg Christmas Ghosts ... I note that Hartwell and Cramer had an anthology of the same title five years earlier.

The schools have been closed for two days because of damage from Wednesday afternoon's violent storm, so today I took the kids to the Metropolitan Museum of Art for the first time. Peter is such a science kid, we'd never been. Of course, I'd been there, but taking kids to museums is different.

We started with the Egyptian section, which was a big hit. Then we did the Chinese art on our way to the Balcony Cafe for lunch. After lunch, I tried to convince Elizabeth that she was interested in European painting by pointing out the Degas ballet dancers.

After hauling the kids through various sections in which they loudly declared their desire to go home, we eventually got to the suits of armor. The kids were very amused by the armor pieces designed to protect horses hindquarters.

We did the new Greek and Roman section last. The kids asked to sit and rest for a bit because their legs were tired. Elizabeth asked for a pen and paper because she had seen people sketching in the gallery. She drew a person.

I started to put away the pen and she complained she wasn't done. So I gave the pen back because she said God needed a tutu.

So she added a tutu and wings. I asked what she had drawn. She explained, "That's an Egyptian ballet god."

(I promise I'll scan it in later.)

Frances Through the Looking Glass & What She Found There 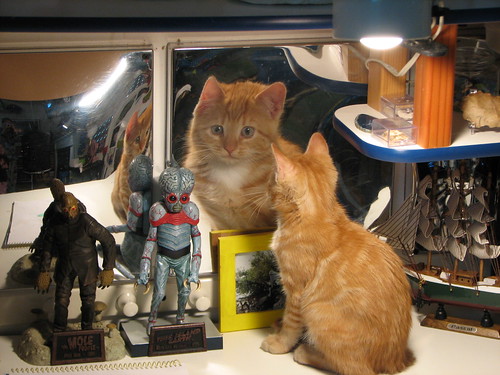