From my email, a local announcement:


The Chappaqua Orchestra will present of a new narrated version of John Corigliano's Red Violin Suite Sunday, April 29, at 3 PM at the Seven Bridges Auditorium in Chappaqua.

Monday, I took my son Peter to YouthCan 2007, a conference for kids on helping the environment through technology held at the American Museum of Natural History in New York City.

Most of the people attending were part of school groups, some from as far away as Argentina, Russia, and Iran, though most from the US. In all, attendance was about a thousand.

A couple of years ago, I tried to arrange for a delegation from my son's school to attend, but in our district there were too many bureaucratic obstacles, and so I failed. This year, when I received a reminder of the event via email, on whim I decided that Peter and I would attend.

I decided to drive in rather than take MetroNorth from Pleasantville, since once you get off MetroNorth it is a bit cumbersome to get -- via public transportation -- from Grand Central Station to the museum. We left home about 8:30 AM and got a nice parking space in the museum parking garage (for which I later paid a hefty sum: $43).

(I had arranged for a babysitter for my daughter in in the afternoon [$30-something], and for the Mother Hen bus service [$30] to get her from pre-school and take her there, so Peter and I had as much time as we needed. Museum admission was free with the event, but I had already run up over a $100 tab as soon as I set the plan in motion. And Linda Hirshman wonders in a New York Times OpEd piece wonders at the struggle of moms rejoining the work-force, or meditates on our competing obligations; or something. It cost a hundred bucks to spend the day with one child in NYC without the other. In my utopia, this would be cheaper.) 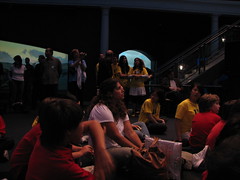 We arrived before opening ceremonies began; opening and closing ceremonies were held in the Hall of Ocean Life -- with the full scale model of a blue whale hanging from the ceiling -- a great venue for any event. The room full of kids and chaperons was better behaved than one might have expected as we waited for the rest to arrive because there was so much to look at just in that one room. 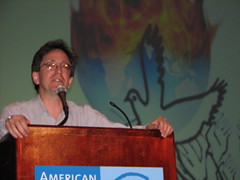 Andrew Revkin, a science writer for The New York Times and author of the kids' book about global warming, The North Pole Was Here, gave what was essentially the keynote speech. He made the interesting point that he realized that after writing 300 NYT articles, the people he should have been writing to were kids, since the decisions affecting our current climate are already made and that the decisions made now and in the near future most affect those under 19. I would have liked to see his one-hour presentation on his trip to the North Pole, but I had Peter signed up for something else, and so just bought a copy of his book to read later.

There were three program slots to sign up for. Our first was EcoMedia, held by The Bronx River Art Center:

This was my first exposure to 13-year-olds giving software demos. I suppressed the impulse to try to help. It made the biggest impression of all on my 9-year-old son, who had seen mommy do many or all of the things the kids were showing him how to do, but having kids show him was different. 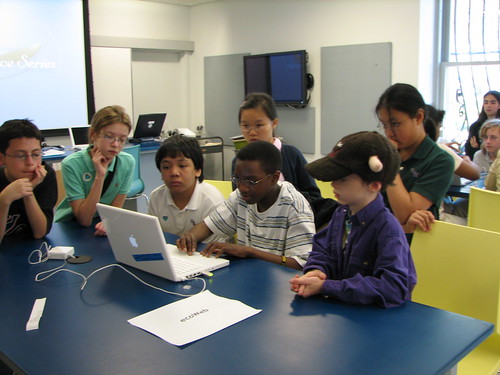 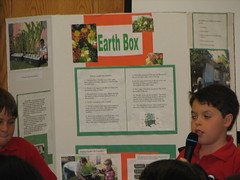 The next session we went to was held by third graders from Miami Country Day School and consisted of a series of presentations by groups of third graders on solutions to the problem of world hunger.

How much land is actually useful for agricultural purposes? Find out and learn about a more effective way to grow crops in many of the poor regions of the world. Be ready to take home all you need to make your own container garden. Make up a recipe with organic herbs flown fresh from our school garden for your enjoyment! This workshop is hands-on, nose-on, and mouth-on.

The kids were doing a splendid job. But the room was hot and crowded (too small for the number of people there) so we slipped off for lunch before the end.

In the cafe, we found the group who had given the ecoMedia presentation, so we sat with them when we ate our lunch. 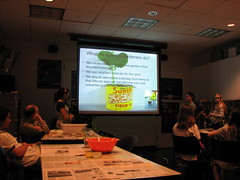 The third session we attended was Guerrilla Gardening, held by sixth graders from the Salk School of Science in New York City.

Save the plants and save the world! Learn how you and/or your school can create amazing indoor gardens while recycling and reusing your kitchen refuse. Plant beans, corn, potatoes, ginger, and much more. Leave with a head start on your own garden!

The students collectively taught a lesson that they might have had at school with their teacher. We drew sketches of various kinds of seeds found in many kitchens (kidney beans, bird seed, popping corn, etc.) then we made planters for them out of clear egg cartons and each came home set up to sprout the seeds on our windowsills. 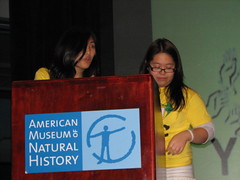 After that, we attended the lively closing ceremonies in which there was some moderated discussion of what we had gotten out of the day. One of the teenagers attending had submitted a compelling short essay that was read out loud. 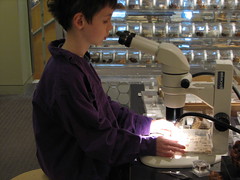 After the official conference was over, we paid a visit to the Discovery Room, one of Peter's favorite parts of the museum. He looked at live grubs and butterfly wings under the microscope. We also spent a while in the museum's enormous gift shop. 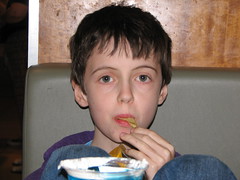 After a snack in the museum's main dining room, we went up to the top floor and saw the Audubon exhibit and the dinosaur skeletons. we saw a few more exhibits and then headed home.

For next year, when Peter will be in middle school, I think I'll try again to get a school delegation together to give a presentation.

Where to see the Geoff Hartwell Experience this weekend 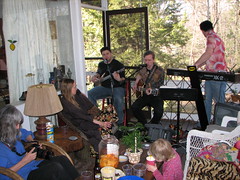 Last weekend they played our house for my birthday! It was great.

Via SF Signal, I discover that we are finalists in the LOCUS Award Best Anthology category; David is also a finalist in the Best Editor category. 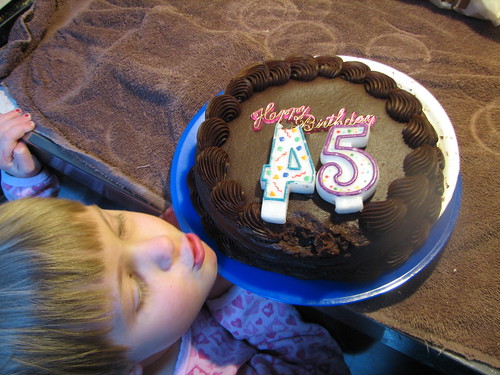 (The towel under the cake covering the stove has to do with the fact that it's raining in the kitchen because of the storm. We apparently got about 8 inches of rain in a day.)

I think I forgot to announce this household's Hugo nominations. David and I (with Kevin Maroney) are jointly nominated in the Semiprozine category for The New York Review of Science Fiction. David is nominated for Best Editor in both the Short Form and Long Form categories. 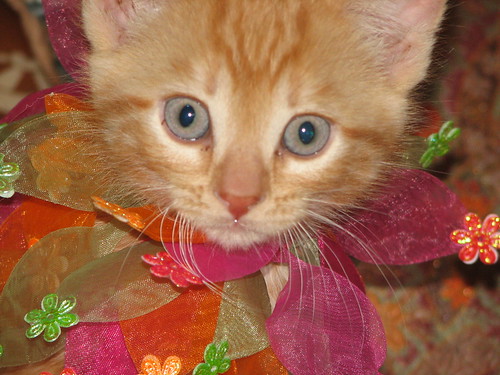 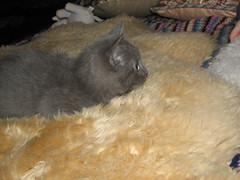 So the kitties had their first vet appointment today, and Viola turns out to be a He, so we've renamed him Vinson.

Geoff in the Journal News

"It was very important to me that this album be a songwriter album rather than a shredded guitar album," says the musician. "I wanted this group of songs to really be groups of ideas and groups of emotional things that you, as a listener, can relate to."

Relating to music, as Hartwell phrases it, is exactly what he was raised to do.

Growing up in Pleasantville, music was a constant in his early years. Though his father worked in publishing, he was constantly bringing the sounds of such musicians as Chuck Berry into the home and often playing in local folk groups.

Because of his father's influence, Hartwell became not simply a student of music, but a devoted disciple before the age of 10.

"When he bought me my first electric, I was just gone," he says. "There was no turning back; there was no choice of what I could possibly do with my life."

Shortly after, by 11, Hartwell began playing locally with his father's folk ensemble. It was also around this time that he began to solidify his friendship with his lifelong friends and bandmates, J.J. Clark and Rich Kelly.

By his teenage years, Hartwell was playing every battle of the bands or open-mic night he could find. While still in high school, he gigged in renowned Manhattan clubs such as Kenny's Castaways, the Lion's Den and CBGB's.

"They didn't know how young I was, so we would get a gig at one of these places and they would be like, 'What the hell?' They would make me stand outside until it was time to play," he says.

The gray kitten is Viola, and the orange one is Frances. (They move really fast now so they are a little harder to photograph.) 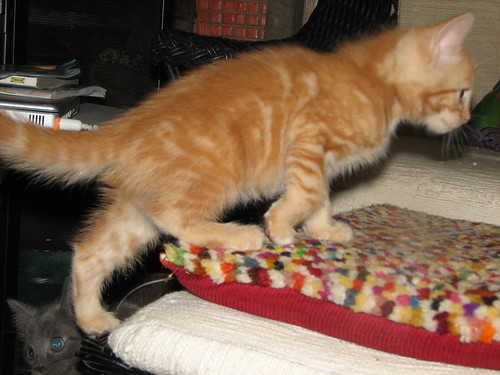 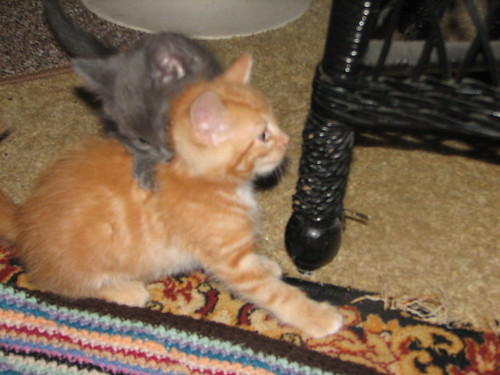 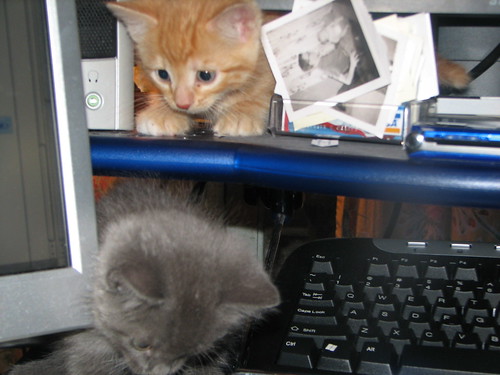