How Far into Israel Can Hezbollah Reach?

I did a graphic in Google Earth exploring Hezbollah's bombing reach, extraploating from the bombing of Afula last night. 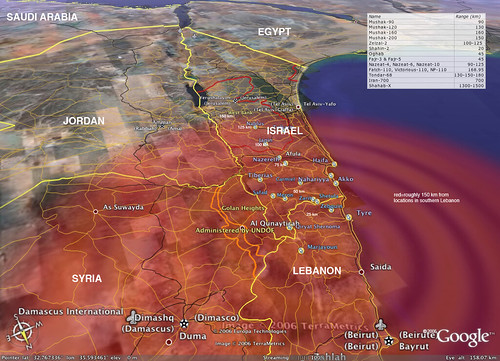 Bill Roggio at the Counterterrorism Blog has a good discussion of the implications: IDF enters Lebanon, a new buffer zone?

Idan at Pixane.net was curious about how the graphic was created, and I wrote a long comment describing the process and what I had in mind. I like the comment enough that I'll add it here:

Glad you like the map. Here’s how I did it. I’m in the vanilla free version of GE on a Mac.

First I did a map, making radii around Afula. I did this by using the GE measuring tool and using an ugly overlay of a circle I’d made in Photoshop. I made 3 radii at 100 km increments. (This was flat on in GE without any tilt.) There are a number of different missile systems to be considered, and so the depiction of radii had to somehow take into account that estimates of what missiles were in use could change hourly. Also, certain assumptions needed to be made. So I made some based on information gleaned from that initial graphic.

I saved several images from GE with identical positioning: with and without the ugly overlay. Then I brought it into Photoshop and made a prettier overlay that looked like a seeping red stain centered in Southern Lebanon. (Not right at the border but in a bit.) Also, because I was having to make a lot of fuzzy assumptions, I feathered the edges of my red stain circle overlay (radius 150 km). I’m not sure how to handle the transparency issues for taking images from Photoshop into GE, so I used the barebones GE view of the place I was planning to put the overlay as a background in Photoshop.

Then I took it all into GE and dropped my 150 km radius in as an overlay and tipped it at the angle I wanted to view it at. That was nice, but there weren’t enough cities marked and there wasn’t enough fine gradation that would allow for considering different scenarios involving missile ranges. I added locations in GE using a map I used as an overlay and then discarded. And I made a fuzzy concentric circle overlay in Photoshop to replace the red stain.

One mistake I made while I was playing with the many drafts is that the Helvetica bold county tags slid around while I was working and I wasn’t paying enough attention to them in the final draft. So my first release had some countries mislabeled. Once someone pointed that out, it took me about 2 minutes to fix.

But the basic idea behind the technique was to use Photoshop as a workaround for things I could envision in GE but didn’t know a fast way to do.

There were a lot of intermediate drafts, including one involving population densities, for example. Total work time: 4 - 5 hours. Also, I solicited comments from people more knowledgable than I am about weapons systems.

The reactions it has provoked are interesting. About 13,000 people have viewed it on my Flickr account since I posted it yesterday. Other than the comments making (or attempting to make) corrections, most of the comments related to it have addressed what is perceived as the map’s political point of view. Regular readers of my blog will not have seen day-by-day pro-Israel rhetoric out of me. What the map represents for me is a sudden change in the military situation in a very volatile region.

A few months ago, during the Iranian military maneuvers, Iran’s military was giving the world to understand that they could take out Israel any time they wanted, partly through proxies like Hezbollah. And that this would be part of a program dealing retribution to the US if the US attempted to stop their nuclear program. So here we are a few months later, and little pieces of this military program are being demonstrated. For the moment, this is about a war taking place in Israel and Lebanon. But I think the implications are much larger. Six years into the 21st century, we are getting a glimpse of things to come.

How Far into Israel Can Hezbollah Reach?

I did a graphic in Google Earth exploring Hezbollah's bombing reach, extraploating from the bombing of Afula last night.

Bill Roggio at the Counterterrorism Blog has a good discussion of the implications: IDF enters Lebanon, a new buffer zone?