Our New Book Is Out! The Space Opera Renaissance is available now! Buy one! Act without thinking! 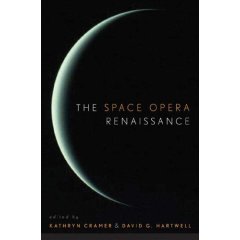 I would take my picture with our new book, but I'm not sure where David put the digital camera. It's the standard Hartwell-Cramer bug-crusher, 941 pages long. It tells you that everything you know about Space Opera is wrong. I'm sending out my mind-control rays to convince you that $39.95 is a really good price for a book that weighs this much. Repeat after me: I. Must. Have. This. Book.

Several people have requested that I post a table of contents. I may get around to that tomorrow.

I have been retained by Wolfram Research to run the Wolfram Science Conference Blog for NKS2006 which started this morning. I will be crossposting some of all of what I post there.

This is my first conference post made this morning. —KC

Good morning. I'm blogging live from my well-appointed hotel room at the Fairmont in Washington, DC. NKS2006 starts this morning with the all-day NKS mini-course by the Wolfram Science staff, plus a reception this evening, where art inspired by NKS will be on display.

I got here yesterday and have been taking the hotel services for a test drive in advance. The Fairmont found me a very nice babysitter named Hazel whom I will be using for the duration of the conference. Also, they told me how to get a nearby rental car which I used to take the kids on an excursion to Chesapeake Bay yesterday. I have also pretested the hotel bar and the Juniper restaurant: pleasantly quiet, good food and drink priced as you would expect for a hotel like this.

My sister and her husband came over yesterday evening with their kids: I'm told the hotel pool is very nice, though lacking much of a shallow end for small children and that their pizza ordered from room service arrived about when room service said it would (within about 35 minutes).

A bit after 9, I encountered Stephen Wolfram in the elevator who said he expected we would all have a lot of fun this weekend.

Well, this really rips the lid off the seamy underbelly of the story of the wild & crazy Armenian brothers in Kenya . . .

Artur Margaryan and Artur Sargsayan, colorful Armenian characters who are apparently brothers, about whom I blogged extensively a while back were arrested and then deported from Kenya, according to news reports. And in the process, some very interesting items in their possession came to light. These guys first came to my attention in the context of the Kenya media raids in which they seemed to be central figures, and are notable for their what's-yer-problem, we-already-bought-this-country attitude when strutting around Kenya.

Margaryan and Sagarsyan forced their way out of the airport with over 12 bags they yanked from the baggage's conveyor belt before they could be opened up for inspection.

Investigations by the Saturday Standard revealed that the passes for the brothers were issued on February 10 while the other three for their "aides" were issued on Thursday morning hours before they turned up at the airport to receive their "brother" and "sister" from Dubai.

The man and woman arrived with the bags with unidentified cargo and it was on their arrival that the airport drama began. Sagarsyan and Margaryan were allowed into the airport without screening, a privilege the KAA security booklet last revised in 2004 says is reserved for President and Cabinet members. The only other category of people exempted from this stringent rule is foreign envoys, and special groups who must be escorted to the plane's elevator by armed police.

When the police later opened one of the bags following a commando raid at their plush Runda home, they found several fake local, foreign, diplomatic and Government vehicle registration plates.

They also found black balaclavas, the kind of which the hooded policemen who raided the Standard and KTN offices donned. The bag was also stuffed with pistol holsters and camouflage military jackets.

In the compound were 11 cars, some bearing GK plates. The vehicles included a BMW, three Toyota Harriers and other luxurious saloon cars.

An official Criminal Investigation Department (CID) letter granting Margaryan the powers of a police officer was also found in the house.

The police team also seized three computers and videotapes, which insiders revealed were similar to those taken away by the police during the March 2 media raid on Standard Group offices.

. . . and the deportation: Kenya: Artur Brothers Deported After Gun Drama At Airport

The two controversial Armenian Artur brothers were dramatically kicked out of Kenya yesterday.

The brothers Margaryan and Sargsyan left on a Kenya Airways flight at 7.30pm for Dubai.

The sudden move, came without even the customary court hearing, following their arrest during a midnight operation triggered by an attack on a Customs officer at Jomo Kenyatta International Airport.

When their home in the upmarket Runda estate was raided, police found a cache of guns and ammunition, plus balaclava helmets and a number of T-shirts branded QRU (Quick Response Unit).

The brothers Margaryan and Sargsyan and two of their accomplices were declared persona non grata and prohibited from returning to Kenya.

The four were deported as police announced in an official statement: "The Government has declared their continued presence in the country undesirable and ordered their immediate deportation."

The two men thrown out with the brothers were named as Mr Arman Damidri and Mr Alexander Tashchi.

Announcing the decision, police spokesman Gideon Kibunjah stated: "Their deportation follows a serious breach of airport security at the Jomo Kenyatta International Airport involving both Artur Margaryan and Artur Sargsyan and their colleagues,"

It went on: "At a time of enhanced aviation security all across the world, incidents that compromise security at international airports can neither be tolerated nor taken for granted."

I still would like to know what that pair were really up to. The whole thing had a kind of start-up with venture capital feel to me, and I continue to wonder who was paying for their attempts to buy the place with beads.

Wonder what will become of their menagerie of attack dogs and attack crocodiles.

There are some things it mostly doesn't occur to me to blog, even though I ought to: Our anthology The Year's Best SF 11, ed. David G. Hartwell & Kathryn Cramer, is out now. (Blogging this does not come naturally to me; so go buy one, OK?)

If you order it from Amazon, they will ship it to you right away.

From Randy Sargent of the Global Connection Project:

Anne and I have generated dynamic overlays (VBR) from maps made by DLR's Center for Satellite-based Crisis Information.  The source imagery for these is Digital Globe and IKONOS, and they cover part of the city of Bantul, which took much of the brunt of the earthquake.

Overlay is available from:
http://www.cs.cmu.edu/~globalconn/2006-05-indonesia.html

Not Really Slacking Off

While it may look like I've been slacking off and letting my blog go to seed, actually, I've been working very hard back here on the other side of the monitor.

Important announcement: I will be doing a separate blog for the Wolfram Research NKS 2006 Conference, held in Washington, DC June 15th - 18th. (For the uninitiated, NKS stands for New Kind of Science, named for Stephen Wolfram's book.) It is a paid blogging gig, funded by Wolfram Research. URL to be announced. But I expect that it will be way cool, given the subject matter. WATCH THIS SPACE for further info.

On another subject, i gave a long interview to a reporter from the financial press on the subject of digital cartography this morning. There was a lot to say. By the end of the interview I was quite exhausted.

Anyway, I've got a lot of oranges in the air right now, and expect shortly to resume giving you a taste of them from time to time. Just now they are flying a little too fast. Lots of good stuff going on. More later.