I think my favorite costume seen at Marcon is T'ffany, a valley-girl Klingon: 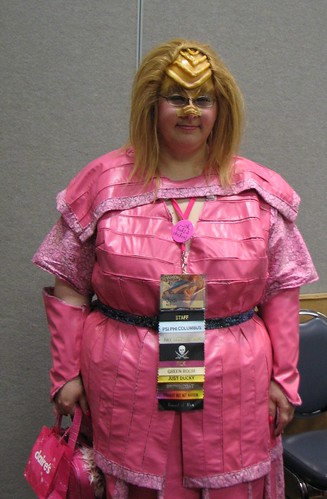 I've posted to Flickr our photos so far from Marcon in Columbus, Ohio, where my husband, David Hartwell, is the Editor Guest of Honor. I'll be updating the photoset as I take more. As seen driving from Pennsylvania to Ohio

On Interstate 70 we saw a sign for the exist to "Lover." Immediately below it was a sign that said "No Re-entry." There's a song in that.

Experiencing technical difficulties. (My G5 is at TekServe in Manhattan.) Regular blogging to resume shortly.

Continue reading "A Week's Worth of Blogging in One Post" »

Posted on Saturday, May 13, 2006 at 08:33 AM in GoogleEarth, Mercenaries & Private Military Contractors, Transparency | Permalink | Comments (0)

Also known as the Nobel Prize of IT, the award is divided into six categories: Culture, Economic Development, Education, Environment, Health, and Public Administration - we have won in the Public Administration. More than 1,100 projects were in competition, out of which 151 were selected as finalists from 53 countries. We were one of the 6 winners.

Others finalists in our category are given at the bottom of the page at http://event.stockholmchallenge.se/finalists.php - they include include FirstGov.gov - The U.S. Government's Official Web Portal!

Khwaja, along with Jishnu Das of the World Bank, founded RISE-PAK as a rapid response to the Pakistan earthquake. The goal of their project was to set up databases and systems of reporting to try to make sure that aid got to rural villages and was not just concentrated in the cities. My contribution to this was to put RISE-PAK in touch with the Global Connection Project, and that we could offer help with maps through the use of Google Earth. The Global Connection Project also interceded with Google Earth on behalf of The Citizens Foundation and RISE-PAK to arrange for Google Earth to acquire up-to-date satellite imagery of the affected area from Digital Globe.

I've written a bit about this in the past. My previous RISE-PAK posts are HERE.

Posted on Saturday, May 13, 2006 at 06:53 AM in Earthquake, GoogleEarth, Pakistan, Pakistan Kashmir Earthquake | Permalink | Comments (1)

Adventures in the "Immigration Issue" from My Past

I have ducked the "immigration issue" thus far, partly because of strong feelings left over from many years ago when I imported my high-school boyfriend who later helped found Microsofts's  International Sales Division and went on to become a Microsoft exec and Microsoft's first "Evangelist."

I had been an exchange student in Germany my senior year in high-school. And after I came back to the US, we didn't really want the relationship to end. He came to visit during the spring of my freshman year of college. And on whim, I married him. (It seemed like a good idea at the time.)

I was really appalled by the whole experience with the Immigration and Naturalization Service, but most notably by the arbitrariness. When nineteen-year-old me finally tried to get her husband a Green Card, I had one of the more insulting conversations I'd ever had in my life with the woman at the INS who wanted to know if I'd ever met my husband before. We walked straight from the offices of the INS to the offices of the ACLU in Seattle's Smith Tower where I peppered the ACLU guy with all kinds of questions about whether immigration officials had any right to behave that way. He explained to me in tiresome detail that, actually, yes they did.

A few months later, when my mother got fed up with the situation and hired us a lawyer, it was a whole different experience. We were seen right away rather than having to wait a couple of hours. Only the most perfunctory questions were asked of us and our lawyer and the INS guy spent pretty much the whole time talking about hunting and retirement. It helped that my husband was German and not, say, Chilean. And he spoke pretty good English by the time we got in there. (I'd spent months honing my skills in simultaneous translation prior to that; but even before he spoke fluent English, he could spell it better than I could because at the Gymnasium in Braunschweig he'd taken Greek and Latin.)

Thus, when I first heard it, I found Richard Shidell's song "Fishing," subsequently recorded by Joan Baez, quite uncanny. I could see in retrospect that there was a kind of game being played in that conversation I had labeled as an icon of upper-middle-class privilege: there was a whole other trajectory than conversation could have taken in which the would-be Green Card holder becomes the quarry.

But we dodged that. Somehow. I'll never really know how. At the time my husband was a professed Communist (though he never joined die Partie); he became a Republican shortly after joining Mircosoft, something I found quite bewildering. (Me, I'm a hereditary Democrat.) Funny how his revolutionary fervor was coopted so easily; to be replaced by evangelism for Microsoft's plan for World Domination.

In the last presidential cycle, my ex-#1 gave two grand to George W. Bush. I thought it was terribly unfair that he had taken all the Wolf Biermann and Franz-Joseph Deganhardt records, given that he'd gone and become a Republican, but I attributed this contradiction to the fact that he was a Prussian: it was never about philosphy; it was about control. Trust is good, he said once over dinner. Control is better. He was quoting Stalin, though he didn't say so.

Back when I was young and naive and he lectured me about Marx and Lenin, I signed up for a philosophy class on the Philosophy of Marxism and I read all that. And then I discovered that his Communism was not about philosophy at all, but about lecturing to a young blonde who hadn't read what he'd read. Once I'd stolen that high-ground and started asking questions about the base and the super-structure, he retreated into computer stuff, which he was much better at than I was.

I took the Fortran course; he got the point. I decided that he was good at computers and I wasn't. He won. I lost. He went to work for Microsoft. I left him and left Seattle. We had a little court battle about whether Microsoft stock options were marital property. He won. I lost. He helped found Microsoft's international sales division. I went to Columbia, though not at his expense.

So how do I see the immigration issue? I see immigration officials as arbitrary bastards with more authority than they know what to do with, without the sense to use it properly, or maybe just without the computer skills or the database. Most of what I have read about the issue has been one kind or another of nonsense.

Finally today I read something that made at least a little bit of sense. Lou Dobbs: Dobbs to President: Do you take us for fools?

President Bush continues to push his guest worker program and amnesty for anywhere between 11 million and 20 million illegal aliens, and he insists still that nothing less than what he calls comprehensive immigration reform is acceptable.

And the lies keep coming from both political parties. This president is not enforcing the immigration laws enacted by Congress, and this Congress is failing in its duty of oversight to demand that those laws be followed.

Only a fool, Mr. President, Sen. Kennedy, Sen. McCain, would believe you when you speak of new legislation. You don't enforce the laws now.

I would modify Dobb's sentiments a little: Whether what Bush was proposing was an actual amnesty program is debatable. But in my experience what there was was class-based and race-based arbitrary enforcement of immigration laws. If the existing laws were enforced and enforced even-handedly, we wouldn't need to have this conversation. Dobbs is echoing what I said to my current husband in the car the other day. There are plenty of immigration laws; plenty of disincentives for people from other countries to come forever to the US. Enforce them even-handedly, THEN find out what other laws are needed. Why make new laws, when enforcement of the current ones is up for sale? 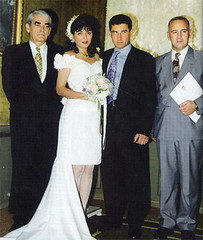 Weird wedding photo, huh? Get a closer look for the full impact of the strangeness of the gazes. So it seems like there ought to be a story here. The next shot in the Flickr series is this one: 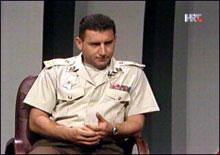 So what was all thus about? I Googled "Gotovina" and came across this Wikipedia entry:

Ante Gotovina (born October 12, 1955) is a former colonel-general of the Croatian Army who served in the 1991-1995 war in Croatia. He was indicted in 2001 by the International Criminal Tribunal for the Former Yugoslavia. The indictment accuses him of sanctioning war crimes under his command in 1995 during Operation Storm at the end of the Croatian War. After spending four years in hiding, he was captured in Tenerife on December 7, 2005.

Gotovina is married to Croatian Army colonel Dunja Zloić with whom he has a son Ante, born in 1997. Before his second marriage, he also had a romantic relationship with Croatian Radiotelevision reporter Vesna Karuza, with whom he had a daughter Ana, born in 1994. Gotovina also has another daughter Ximena from his first marriage with Columbian journalist Ximena before the war.

I don't know whether to be sorry for the bride, Dunja Zloić, or not. Surely, she is gazing at the camera as though this is the most important day of her life while everyone else looks elsewhere, but what does she know about the men in the photo? What has already happened? And which events are yet to come?

Surely, the photo is a narratively interesting object.

From the NYT: Rumsfeld Defends Pick for C.I.A. Chief

As for changes in the intelligence bureaucracy since the Sept. 11 attacks, Mr. Rumsfeld described the evolution as "a collegial and open process," nothing like the bureaucratic struggles described in the news media.

FORTHCOMING: Rumsfeld defends Iran as a future source of fine green glass that glows in the dark for use in nightlights.

Elizabeth learns to hang a spoon from her nose. 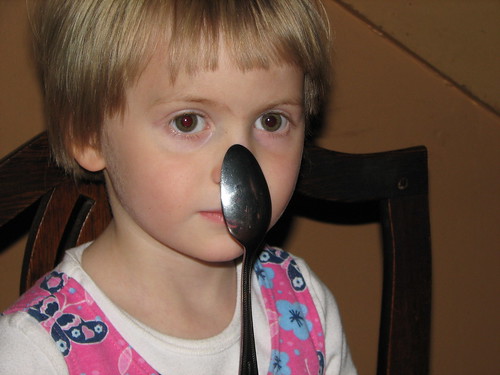 This weekend, Elizabeth acquired a new skill: now she can hang a spoon from her nose all by herself.

Map of a Universal Dynamic of 21st-Century Greed

I've been working on a research project using Eastgate System's "personal content management tool" Tinderbox to organize my notes. While working with it, I discovered this bit of serendipity that emerged from the "Map View" of the software. I looked at this image and realized that it was a sort of map to the dynamics of private sector 21st century greed. If you click on the image you'll be able to read the labels better. 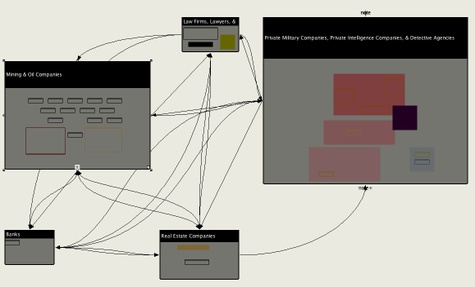 An Event Wonkette Was Born to Cover: Porter Goss's Resignation 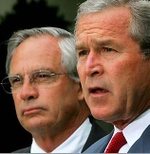 Apparently Porter Goss, head of the CIA, is out, and under interesting circumstances. Go read Wonkette: Porter Goss Played More Than Cards

Bush: “Over the years, I’ve established a very close personal relationship with Porter.” Well, Mr. President, you weren’t the only one…

See also Josh Marshall: Oh my ... Goss out at CIA; and No Quarter.

If you’re on the House Defense Appropriations Subcommittee, don’t answer your phone for a while.