There are a couple of blogs that have detailed Readercon writeups: The Mumpismus (Day 1 & Day 2) where Matt Cheney drove himself nuts trying to write down everything that was said on some very fast-moving panels; and Sybil's Garage, which also has some photos.

Readercon is perhaps the best sf con in North America, and it's great to be here. But this year, they decided to break something that has worked fairly well for us at previous cons: ReaderKids is gone. The convention is not completely without childcare (thanks to relentless effort on the par of convention co-chair Diane Martin; thanks Diane!). But I think I'm the only one not on the concom to have navigated the secret handshakes necessary to get some onsite babysitting, so I have been able to attend the program on both Friday and Saturday. (I managed this only thanks to a quickthinking reader of my blog who saw the notice on the con website about what you have to do to get childcare here, and emailed me the instructions.) Unfortunately, it's not looking good for today. I'm resigned to missing the entire Sunday program for lack of childcare, though we may be able to improvise some kind of mother's coop. Though just how I can pack up our room, help pack up our dealers' table, do my time taking care of other people's kids to earn some childcare time for my self, AND attend program items is not at present clear to me. So it looks like no Sunday panels for me. Sigh.

The sf field just can't get past treating moms as second-class citizen, and it's a real shame. Readercon can't say they they dind't know kids were coming, because they devote half a page to "Children at Readercon" detailing what will happen if you leave you child unattended. (No, they will not be imponded and sold at auction, but close.) There are a lot of kids here.

(I should say that this is the second weekend in a row where I am the sole non-concom attendee of a convention to receive childcare arraged for by the convention. Last weekend we were at Westercon in Calgary, Alberta, where the convention graciously arranged for a group of teenaged babysitters to take care of Peter and Elizabeth; it was one of David's terms for accepting as Editor Guest of Honor. But there were others at the con who needed childcare. I specifically remember a mother with an infant who had to walk out of our Space Opera panel ten minutes in because her baby had decided to talk back to the panelists.)

Folks from the UK sited (in good health) at Readercon so far: Graham Sleight (who was boarding his flight here about the time of the attacks), Farah Mendlesohn, and John Clute.

From my office window, for what it's worth, I can see blue flashers, stalled traffic (well, that's hardly unusual) and an editorial floor emptying with eerie rapidity. And - for a couple of seconds - they just sounded the fire alarm. How stupid can you possibly get? Naturally, we'd be far safer in the streets - with the terrorists. I, personally, intend to stay until they shoot my desk out from underneath.

I know that kind of day. And after all the wars and propaganda that have come out of 9/11, it is hard to talk about, except to say do not underestimate the effects of living among people who are extremely stressed out by a terrorist attack.

A FURTHER THOUGHT: Why did they keep the buses running when stuff started to blow up? Why shut down only the subways, and not the whole thing? One would think that certain lessons had been learned from the sarin attacks in Tokyo: when under attack shut it ALL down.

So far, the wikipedia coverage seems to be the best.

Can anyone tell me why Apple doesn't sell a cable that will connect the DVI port on the back of the new models to the DVI port on the backs of popular models of HDTV? Apple Support's answer to this question of what cable to use boils down to "ask SONY." There are a number of cables available on the web that look like they might by the right one. But they start at $50 and seem not to be available in stores in my local area. I've called a couple of places nearby to see if they have the cable I think I need, and they don't. It seems to me that as a consumer I should not have this problem. I should be able to get reliable advice on which cable is The One, give someone my credit card number, and have it arrive.

Speaking of terrifying photos, here is a shot of Elizabeth a few minutes ago arranging the contents of a newly purchased package of Pullups in geometric patterns on the hotel-room floor: 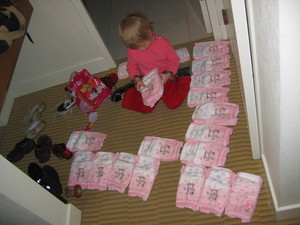 I see that Mark Kelly hasn't posted the Locus Awards yet, so I'll beat him to it:

This was an event of deep seriousness. Note, for example, the formality of Charles N. Brown's toe ring, worn at the podium.

And just how did Connie Willis get all these guys to dance the hula? You'll have to wait for the full official LOCUS report to find out!

(Yes, that's Tom Doherty on the left, David Hartwell in the hat, and John Varley, second from the right.) 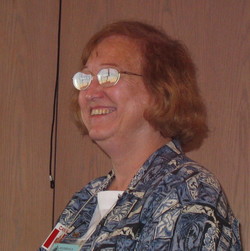 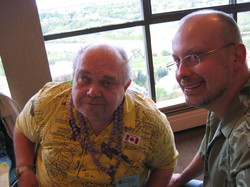 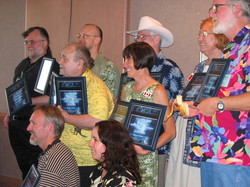 UPDATE: For some much more dignified photos of the occasion, see Edward Willett's blog. He's been blogging Westercon in Calgary much more diligently than I have. See also his Thursday night posts, parts 1 and 2, his Aurora Award ceremony coverage, his post about Friday (which includes a nice picture of David and me), and his coverage of Saturday. (I feel tired just linking to all this!)

There are more pictures plus a con report in French at Fractale framboise.